The Malindi business Community organised a dinner for Governor Mung'aro to congratulate him.

•Mungaro's political journey began in Malindi when he worked in the hotel industry in different resorts. 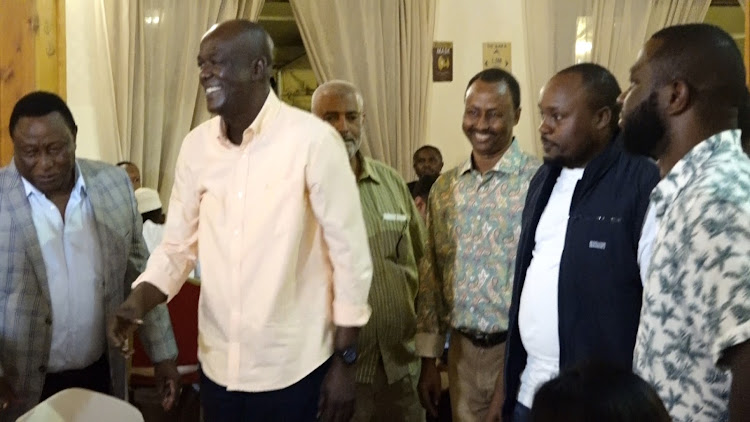 Kilifi Governor Gideon Mung'aro (C) with some of the members of Malindi business Community during a dinner at Ocean beach resort and Spa
Image: ALPHONCE GARI

Kilifi County Governor Gideon Mung’aro has pledged to push for the upgrading of the Malindi International Airport infrastructure and the development of an international convention centre to boost tourism in the region.

Mung’aro also said he will enhance waste management, improvement of general infrastructure and drainage, and the development of a Beach Management Policy.

Addressing the Malindi business community during a thanks-giving dinner they had organised for him following his victory, he said the county will also develop an international sports complex, which will bolster sports, tourism and talent development.

Further, he said the British government is set to begin a grand project of upgrading the town infrastructure from drainage, sewerage system, and beautification of the town which will be a game changer for the resort city.

Mung’aro challenged the hoteliers to be innovative in the development of new products that will make Kilifi more attractive in the global market, given that only 13 out of the more than 400 hotels are star-rated in the region

In Kilifi, he said plans are underway to establish Kilifi medical training and referral hospital at Pwani University which will be established on an 89-acre parcel of land after the institution was approved to begin offering courses of medicine.

"My administration remains committed to the achievement of some of the specific issues highlighted tonight including the upgrading of the Malindi International Airport infrastructure, the development of an international convention centre to boost tourism, enhanced waste management, improvement of general infrastructure and drainage, and the development of a Beach Management Policy,” he said.

The expansion of Malindi international airport has been a major issue for investors and the business community for a long time.

The government is left with compensation for locals who are within the area earmarked for the expansion of the runway by 1.4 kilometres to add up with the current 1.4 kilometres.

About Sh. 1 billion is required for compensation before the government can embark on the expansion works.

During the meeting, speakers are drawn from the national Chamber of Commerce, Kenya Hotel keepers and Caterers association, Hoteliers, and business people among others.

Mung’aro said he was currently working to fix the lighting system in the town and entire Kilifi county so as to make it a 24-hour economy.

Majid Swaleh the chairman of Kenya National Chamber of Commerce and Industry Kilifi county said the business community has a lot of hope in the leadership of Mung'aro.

He said they were ready to offer their advice anytime with a view to ensuring the success and prosperity of the county.

Kilifi Governor Gideon Mung'aro greets some of the members of Malindi business Community during a dinner at Ocean beach resort and Spa
Image: ALPHONCE GARI

“Seriously we depend on tourism in Malindi and if you don't sit with hoteliers to know what they want, where we can improve tourism we will remain for another five years without any improvement,” he said.

Swaleh also called on the government to invest in Agriculture and work with donors such as Kenya Red Cross Society, and World Vision among others who already have initiated projects so as to create job opportunities for the locals.

“So many people are coming from rural areas to town to look for jobs but there is a lot of potential in Agriculture where with the existing partnerships they can be funded to do projects and earn a living, he said.

The Chairperson of Kenya Hotel keepers and Caterers association in Kilifi County Maureen Awuor emphasised the need to deal with the garbage, lighting, and expansion of the airport.

She also called on the governor to ensure waste management and beach management is addressed to ensure they are clean always.

The Chairperson also said the county government needs to solve the delay in payment of services rendered by the hoteliers which amounts to more than Sh. 25 million.

She said there are some hoteliers who have not been paid by the county since 2019.

“This is a resort city and we need lights security starts with the lights without them a person who is next to you you cannot know what's going to happen. Lights are not working and we need to see them working, sewerage plant and water are among the issues which are already on your table," he said. 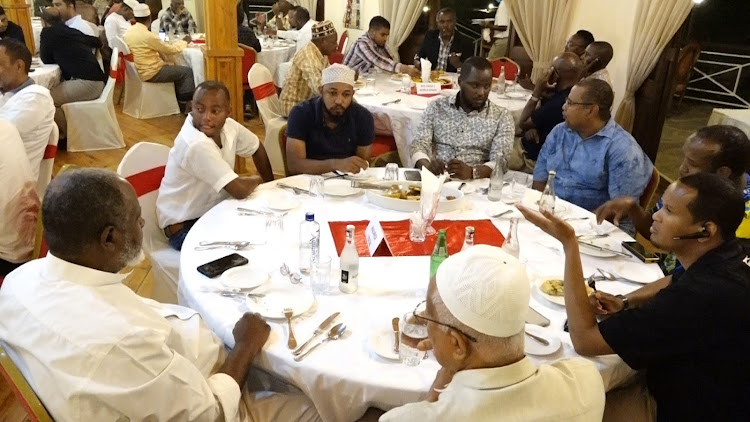 A section of the Malindi Business Community during the dinner organised for Gideon Mungaro the Kilifi County Governor at Ocean beach Resort in Malindi
Image: ALPHONCE GARI

Philemon Mwavala from the Kenya Association of Tour operators said tourism stakeholders have suffered since the Covid 19 pandemic hit the country.

He said they look forward to support from the governor.

he said the investments in infrastructure are key because the current traveller is different and relies largely on experiences.

“As Kenya Association of Tour Operators we sell experiences and if you put all these things together Kilifi will take its rightful positions in tourism numbers and job opportunities for the people of Kilifi,” he said.

Titus Kangangi, a hotelier in Malindi, said it's shocking to see there are only two five Star hotels in Kilifi.

Kate Mwikali Chairperson of the Progress Welfare Association of Malindi said they formed the association to deal with the increased garbage and potholes in the town and the town was not bothering.

“We have been organising monthly clean-ups which are aligned with job creation, environment, and social aspect and economy sustainability,” she said.

She called on the Governor to relocate the Mayungu dumpsite and move it to another site where it would be easier to implement the solid waste management act and create jobs.