Mombasa lawyers say justice has been finally been served 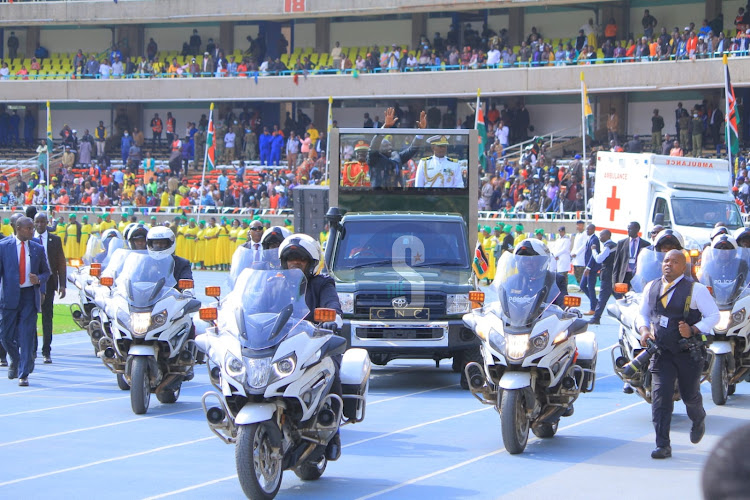 NEW ADMINISTRATION: President William Ruto takes his first lap of honour around Kasarani after being sworn in on September 13, 2022.
Image: EZEKIEL AMING'A

The Mombasa Law Society has praised President William Ruto for appointing six judges whose promotion has been pending for the last three years.

Immediate former MLS chairperson Mathew Nyabena said failure by former President Uhuru Kenyatta to appoint the judges, even after being ordered by the courts, was an act of contempt not only of the courts but also of the constitution.

On his first day in office, through an executive order, Ruto appointed the four High Court judges —Odunga, Muchelule, Korir and Ngugi - to the appellate court and Makori and Omange to the Environment and Lands Court.

“President William Ruto has started on the right footing by appointing the six judges, whose appointment has been pending for three years,”  Nyabena said.

He said insinuation by the state that the judges had engaged in malpractice without prosecuting them may have caused them mental anguish and damage.

He said the six judges are now free to seek remedies for the injury to their persons.

“At last our prayers and demands have been answered.  Let justice and due process be our defenders always. To the honourable judges, this is surely justice at last. Serve well,” he said.

In his maiden speech after being sworn into office, Ruto said that he had appointed the six judges as a demonstration of his commitment to the independence of the Judiciary.

"To demonstrate my commitment to the independence of the Judiciary, this afternoon (Tuesday), I will appoint the six judges already nominated for appointment to the Court of Appeal which was done three years ago by the Judicial Service Commission," the President said.

Former JSC vice chairperson Dr Mercy Deche who was involved in the recruitment process of the six judges, said what President Ruto did should have been done three years ago.

“I do not really think we need to look at it as favour that has been done to the six, it is just justice being done to them, justice that was delayed for three years,” the vice chairperson.

Deche said despite the former President saying the National Intelligence Service had adverse reports against the six judges, that report was never made public.

She said the report was never tabled before the JSC.

“I was the vice chair of the JSC team that recruited the six, and there was nothing on record to show that they had done anything wrong. Nothing was put forward even in private for us to know what they had done,” she said.

Dr Deche further said the six were already serving in the Judiciary and if there was anything wrong against them, then there were procedures to follow as outlined by the JSC to bring them to book.

She said the former president might have refused to appoint justices Odunga and Ngugi who were part of the three-judge bench that squashed the Building Bridges Initiative process, rendering it null and void.

“If you ask me, some of these people are the cleanest in the Judiciary, so when they are being persecuted you may think that they have done something else that is so adverse to their appointing authority,” she said.

Deche said the courts have continually said that the president has no role in the recruitment of judges other than just appointing the names forwarded by the JSC.

Benjamin Njoroge, who has also served as MLS chairperson, said the six judges whose appointment was pending for three years are some of the best legal minds in Kenya.

He said the accusations that were levelled against them dented their reputation in the eyes of the public.

“When you say someone has a problem, but then you continue allowing them to serve in the Judiciary, that is demeaning his or her status as a judge,” Njoroge said.

He challenged the six judges to now discharge their duties well.

Already, Ruto has said he will announce new fertiliser prices next week.
News
1 week ago

Will Ruto deliver on his 100-day promises?

Will Ruto deliver on his 100-day promises?
Poll of the day
1 week ago