• The Mwakirunge dumpsite is currently facing legal tussles from the Kenya Civil Aviation Authority and residents, who are calling for its closure.

• Nassir promised to float an international expression of interest for companies to bid for a tender on solid waste management in Mombasa within his first 100 days in office.

Mombasa Governor-elect Abdulswamad Nassir has hit the ground running trying to resolve the garbage menace, which has bedevilled the coastal town for years. https://bit.ly/3RtLQWz 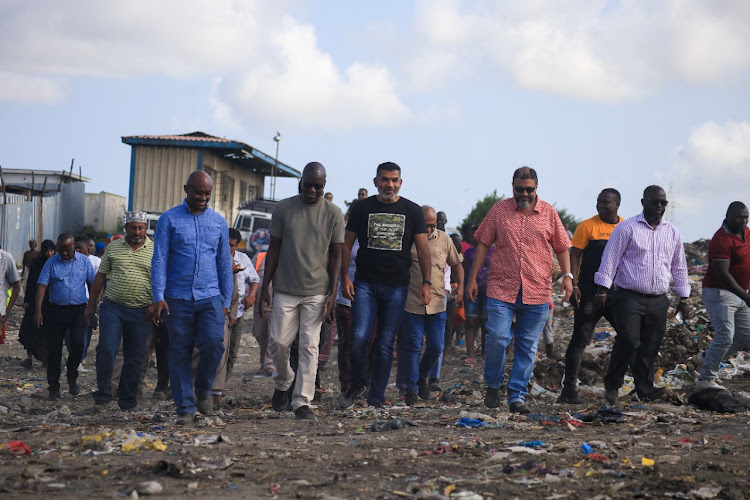 Mombasa Governor-elect Abdulswamad Nassir has hit the ground running trying to resolve the garbage menace, which has bedevilled the coastal town for years.

On Tuesday, Nassir led a high-level delegation to the Mwakirunge dumpsite in Kisauni constituency on a fact-finding mission.

Nassir said there is a need to understand the challenges at the dumpsite in order to be able to offer the best solution.

“Before we are sworn in on September 15, I found it prudent to come here and understand what is happening so that we can all agree on the best solution.

“As you can see, there is garbage all over even blocking the access road leading to the designated dumping site. The good news is that I have already talked to Kerra and hopefully construction of the road from Kiembeni to here will begin soon,” he said.

The Mwakirunge dumpsite is currently facing legal tussles from the Kenya Civil Aviation Authority and residents, who are calling for its closure.

In May the Mombasa High Court ordered the county government to stop depositing waste at the site.

Mombasa Lands and Environment court judge Lucas Naikuni issued the orders on May 11 after petitioner Ainea Ragen moved to court.

Ragen a public interest litigator said thousands of Mwakirunge residents have been complaining of toxic emissions coming from the dump site.

In his petition, he said Mwakirunge is also on a flight path and the scavenging birds pose a risk to low-flying planes landing at the Moi International Airport, Mombasa.

The Ethics and Anti-Corruption Commission and Directorate of Criminals Investigations are listed as interested parties.

Nassir said they are aware of the legal tussle in court.

“I am aware of the matter in court and I assure you that Mombasa respects the law. However, we are planning to have a sit down with KCAA and come up with an amicable solution to this,” he said.

The governor said he is also aware that Mwakirunge sits on a flight path and if the garbage is not well managed, it could be a threat.

"However, I believe that after seeing the documents and concerns raised, we will be able to come up with a solution,” he said.

Nassir promised to float an international expression of interest for companies to bid for a tender on solid waste management in Mombasa within his first 100 days in office.

This he said was going to be a long-time solution to the garbage menace in Mombasa.

“We already have a number of organisations that have expressed interest. Calls are already coming in from organisations conducting pilot projects on the separation and disposal of garbage.

"I want to assure Mombasa residents there will be no direct tendering. We shall follow all the procurement laws in awarding the tender. This is a new beginning, we will make it an open international tender,” Nassir said.

The governor-elect said they are partnering with the Kenya National Chambers of Commerce and Industry Mombasa Chapter, who have promised to repair the garbage collection vehicles that are grounded due to mechanical problems.

He said KNCCI had also offered to avail bulldozers to clear the mountains of garbage blocking the access road to Mwakirunge.

Nassir who also promised to shut all illegal landfills including VOK, Kadongo and Kwa Sonko urged Mombasa residents to be responsible and not litter everywhere.

Deputy governor-elect Francis Thoya committed to supporting his boss in the quest to make Mombasa clean again, saying they intend to do the work in the first 100 days.

He said he is aware of the issues with piles of garbage in Manyimbo and Makaburini burial sites.

"I am also aware of the disquiet from a section of the Christian faithful’s saying there is discrimination that only the Christian burial sites are filled with garbage.

“That’s not true, but my assurance to the Christian fraternity is that the garbage will be removed. I will personally oversee that it is done," Thoya said.

He said the county will construct perimeter walls around the two cemeteries to stop any further illegal dumping.

Thoya also urged residents to be responsible for the environment.

“Mombasa belongs to all of us, and as such, we all have a duty to play to keep it clean. As a county, we will play our role to ensure that garbage is collected on time, but you also have to ensure that you don’t dump garbage anywhere,” he said.

KNCCI Mombasa chapter chairman Mustafa Ramadhan said as the private sector, they decided that they should not only point out what is ailing Mombasa but be part of offering solutions.

He said the county had requested them to help and they obliged saying that theirs is just a temporary solution as they look forward to a permanent one.

“We all look forward to a cleaner Mombasa, but we all have a role to play in helping the county government achieve its mandate,” Ramadhan said.

Mombasa is grappling with pending bills in excess of Sh4.29 billion.
Counties
2 months ago

He said he will issue an executive order to that effect.
Counties
2 months ago