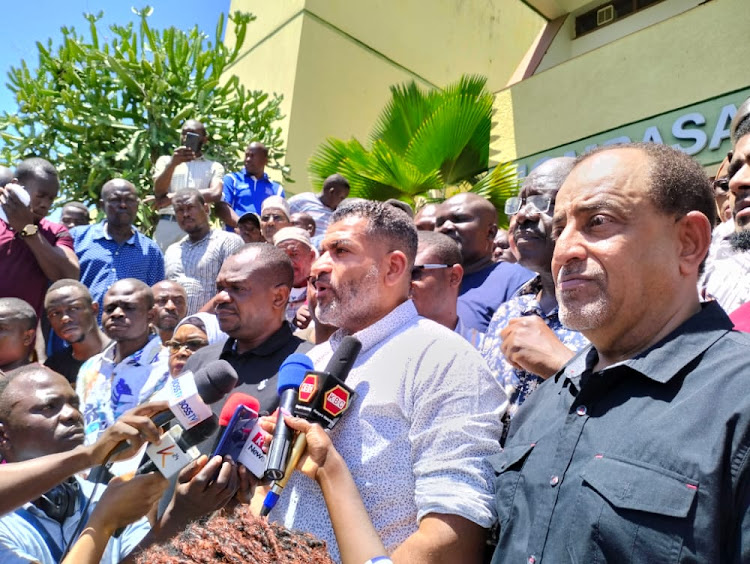 An exodus of ODM supporters is happening in Mombasa county, with youths and women decamping to UDA.

The majority of those leaving ODM were supporters of Mombasa businessman Suleiman Shahbal and are now backing UDA governor candidate Hassan Omar.

In April, Shahbal quit the governor race in favour of Nassir after the intervention of President Uhuru Kenyatta and ODM leader Raila Odinga.

“I have been aspiring to be governor of Mombasa for the last 10 years. The objective was not for Suleiman Shahbal, but to bring change and development to the people of Mombasa," he announced then.

Shahbal was running his campaign under the slogan of 'Change must come', which has since then been adopted by Omar in his 'Mageuzi Halisi' campaign slogan.

In early May, Shahbal’s running mate, Selina Maitha was the first to defect to UDA.

Selina, a decorated public servant with more than 20 years of experience, was picked by Shahbal as his deputy on March 23.

Major (Rtd) Idris Abdulrahman, who was Shahbal's campaign manager has, however, said Shahbal supports Azimio and is backing Nassir for the governor seat.

"The main campaign structure is still intact and fully behind Nassir. Those who have left were not part of the main structure," he said.

"So I am not worried about them, most were just social media guys."

Last week, both Nassir and Shahbal held meetings with Shahbal's campaign coordinators to discuss strategies on how to win.

Shahbal also accompanied Nassir to the high court in Mombasa as three residents filed a case to compel the Independent Electoral and Boundaries Commission to conduct the governor election that had been postponed indefinitely.

"Our campaign secretariats are co-working. We normally exchange and compare notes from time to time. Even last week we met Nassir with all the ODM elected MPs in Mombasa, the women representative, and Senator," he said.

"We are strategising as a team, of course in a group you won’t miss one or two who will want to go their own way. It is their right we can't stop them."

They say they are optimistic of taking over Mombasa leadership on August 9.
Counties
6 months ago

It is likely that Selina will be picked to deputise Hassan Omar.
Counties
8 months ago

Shahbal under pressure to run as independent aspirant