.On the other hand, Ngolia MCA Jones Mghanga is lobbying for the majority leader post in the assembly. 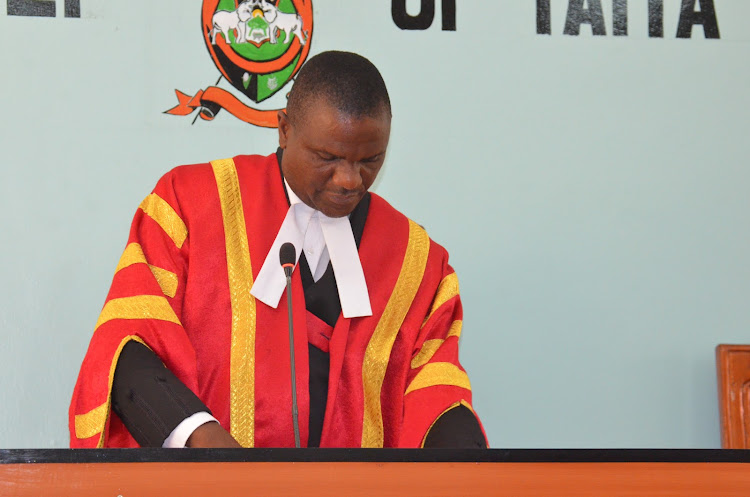 Intensive lobbying has started for the next Taita Taveta county assembly speaker days after the conclusion of last week’s general elections.

The interested candidates have started courting the newly elected MCAs in a bid to win the seat.

The current speaker Meshack Maghanga is banking on the 15 first-time MCAs to secure a third term.

Besides the 20 elected ward reps, 13 more members shall be nominated to join the assembly.

Maghanga has led the assembly since its inception in 2013 and has received praises and blame in equal measure.

“He stood strong when the county assembly was engaged in a fight with former governor Granton Samboja over a budget impasse. Most of his friends have lost their seats though,” Collins Mwadeghu, a governance expert said.

Mwadeghu, however, noted that the incumbent speaker is facing an uphill task in convincing the newly elected youthful ward reps since many would want to elect one of their own.

He said the protest vote that saw the majority of MCAs lose their seats might find its way to the house.

“There is a likelihood of a tight race between the candidates owing to the fact that the new MCAs form the majority,” he said.

He added that the candidate aligned with the governor-elect Andrew Mwadime will have an upper hand.

Other candidates said to be rooting for the seat are Voi-based lawyer Onesmus Mwinzi, former Sagala MCA Godwin Kilele and former nominated MCA Christopher Mwambingu among others.

Bomeni MCA-elect Crispus Tondoo is seeking to retain the deputy speaker post that he has held for the last two terms.

On the other hand, Ngolia MCA Jones Mghanga is lobbying for the majority leader post in the assembly.

Mghanga won his third term and had previously served for two terms in the defunct county council.

“This time I will be seeking to get the position of majority leader. I think it will be a useful position for me to give guidance to the new MCAs as part of my passion to mentor young leaders,” Mghanga said in an interview on Tuesday.

He said all the elected ward reps are planning an informal meeting to get to know each other and discuss how they will make the house better than before.

“I have already reached out to some of my colleagues who were re-elected. We shall further meet the first timers to strengthen our bond before the sittings begin,” he said.

He said the members will not bow to any external influence on the election of speaker and sharing of other posts in the assembly, pointing out that each party will have a say according to the number of members.

In total ODM and Pamoja Africa Alliance party share majority of seats after garnering 5 seats each while Kalonzo Musyoka’s Wiper party has 4 seats.

Jubilee, the Communist Party of Kenya, the People Empowerment Party, and UDA have one seat each.

He said he will work together with all elected leaders to advance Taita Taveta.
Counties
1 month ago