•She was on Friday declared by the County Returning Officer Obadiah Kariuki at the  Kenya School of Government's main tallying centre in the Matuga constituency. 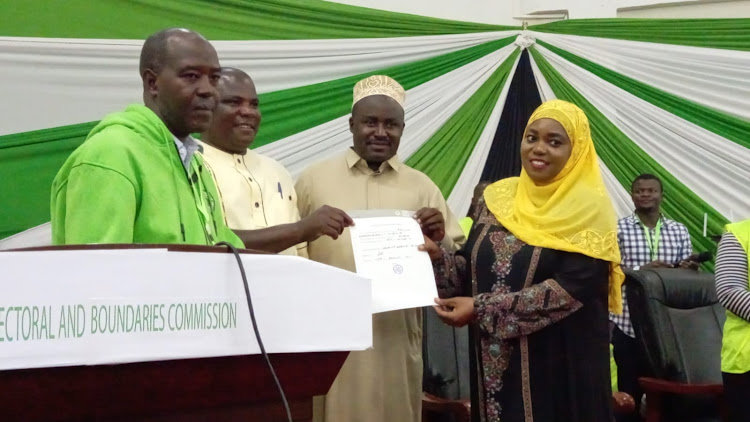 She was on Friday declared by the County Returning Officer Obadiah Kariuki at the  Kenya School of Government's main tallying centre in the Matuga constituency.

Achani vied on the UDA party ticket after the outgoing governor Salim Mvurya fell out with ODM and Jubillee parties during their first and second terms.

In the senatorial position, Issa Boya of ODM maintained his seat by garnering 52, 772 votes.

At least nine candidates vied for the senatorial seat.

Fatuma Masito of ODM was declared the new woman rep after garnering 58,820  votes.

Bibi Masha (UDA) was the first runners-up with 44,472 votes followed by Zainab Chitsangi (Independent) who had 35,633 votes.

Out of six parliamentary seats in Mombasa, the party is poised to win five
Counties
1 month ago

My comeback was not very smooth, says Gonzi Rai

When Rai announced his return to politics, many dismissed his bid and joked that he was finished politically and unstable.
Elections 2022
1 month ago

The candidates decried that the KIEMs kits were tampered with.
News
1 month ago

Two arrested for possessing ballot papers, Forms 34A in Kwale