It’s all systems go as voters cast their ballots 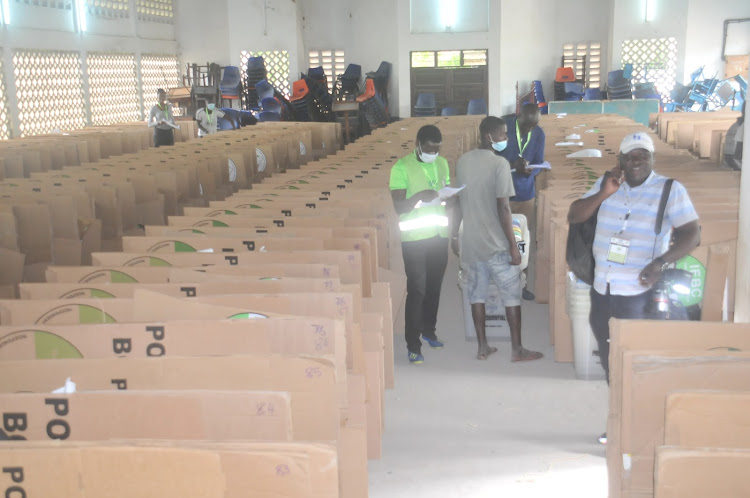 The Constitution of Kenya 2010 requires that a general election be held on the second Tuesday of August every fifth year.

After a long wait, at least 1.9 million registered voters are today expected to cast their votes in all the six counties of the coastal region.

On Sunday, IEBC Mombasa returning officer Swalha Yusuf said they are ready for the election and all voting materials have since been deployed to the polling centres.

“We have received all the material that will be required for this election, our constituency returning officers will pick their materials and dispatch them to their polling stations in readiness for the polls,”  Yusuf said.

Mombasa has a total of 1, 047 polling centres, Yusuf said.

She said inmates from the four prisons within Mombasa will also be allowed to vote for their presidential candidate of choice.

Security officers have been deployed in Mombasa to ensure peaceful polls, she said.

“So far, we have not encountered any challenge and we are ready to open all the polling stations on time. Our officials are in the process of moving all crucial materials to the centres,” Mohammed said.

She said a multi-agency team of security officers has also been deployed to ensure adequate security, further asking residents to maintain peace.

Mohammed said people will not be allowed to idle around the polling stations.

“Voters are advised to leave the station immediately after casting their vote. The work of monitoring elections should be left to clerks, agents, observers, media and other players,” she said.

He said the IEBC officers are not compromised and are strictly abiding by the law to make the exercise transparent and credible.

However, he said anyone who will be found engaging in any form of election malpractices shall not be spared.

In Kwale, there are 744 polling stations that will be used for the voting exercise, two of them being Kwale Male and Kwale Women GK prisons.

At least 63 prisoners- 59 men and four women, will take part in voting.

In Kilifi, IEBC said they have 1,145 polling stations and 588,602 registered voters, who will be taking part in the voting exercise today.

Kilifi returning officer Hussein Gure said among those who will vote in the election include 240 prisoners.

“In terms of election preparedness as far as Kilifi County is concerned, I can say with confidence that we are prepared for the elections,” he said.

Gure said there are some regions that are being considered hotspot areas, but they are working closely with security officers to deal with any emerging cases.

“The hotspots will be watched closely and anybody intending to cause trouble will meet with the law,” he said.

They said campaigns were carried out in a peaceful process and can be trusted.
Counties
6 months ago

Moment of truth for Ruto, Raila and Kenya