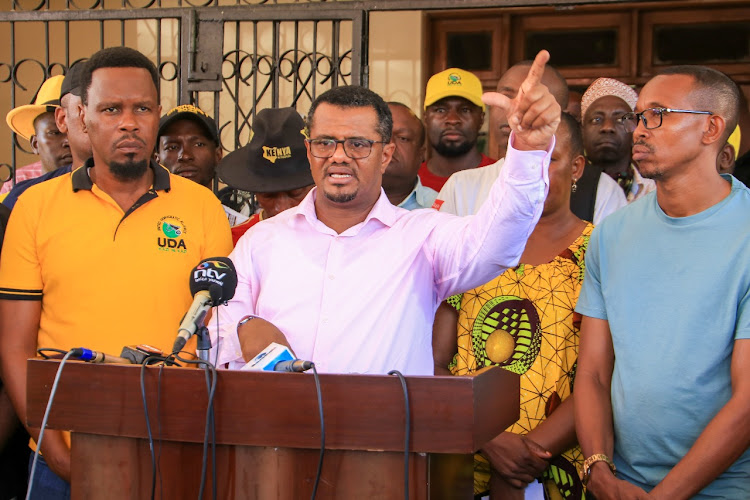 As the curtain falls on the campaign trail on Saturday, top Mombasa governor candidates made their last appeals to Mombasa residents in a bid to woo them.

In his final press conference at the Hustler Centre in Nyali, UDA candidate Hassan Omar outlined his five-point agenda that he termed the ‘wheel’ that will drive Mombasa to prosperity.

He said he will give priority to water, health, economy, education, and land.

“This is the pillar of my administration outlining the sectors we will deal with in the first five years,” Omar said.

Omar said that his team knows what ails Mombasa and proposes pragmatic interventions to all its sectors.

He said that his plan for Mombasa aligns with the UDA bottom-up economic transformation agenda, Kenya’s Vision 2030 and various development instruments specific to Kenya’s 6oo-kilometre coastline.

“At the centre of these interventions is the deployment of a bottom-up middle-out approach, Kenya’s truer economic model with the people as its drivers,” Omar said.

The former senator said that he had held 840 meetings and had 67 interactions with various stakeholders across Mombasa in the last five years.

From the engagements, Omar said his team was able to develop a blueprint of ward-based executive committees which he expects will roll out devolved functions.

Omar added that his plan looks at giving real effect to Article 159 of the constitution on meaningful and effective public participation.

“My plan aims at putting power in the hands of the people. It is the residents of Mombasa who will dictate what they want to be done and when,” he said.

He said that his plans address the dignified livelihood of all citizens by uplifting the low-income earners while allowing businesses to thrive within the confines of good practices.

Omar also took a swipe at the incumbent Governor Hassan Joho-led administration saying that Mombasa has over the last ten years witnessed the worst form of retrogressive politics.

He alleged that access to livelihoods had been limited, resources massively plundered, enterprises destroyed, development suspended and families left to fend for themselves.

He claimed that the democratic gains achieved since the advent of multiparty democracy had been eroded by the current leadership adding that the rule of law and the bedrock of democracy were under severe threat.

“To continue this humiliation, the current leadership has fronted a weakling project as its chosen candidate for the gubernatorial seat," he said.

“Now is the time to break this unwanted patronage, a time for all Mombasa residents to reimagine and create a better future. Give us a chance to liberate Mombasa by electing us in office,” Omar said.

He expressed optimism that the school was going to help more girls from Mombasa and the region at large to bridge the gap in education as outlined in his manifesto.

“Today, in my last official act as the MP for Mvita, I commissioned the largest day school in the entire Coast region, the Mekatilili wa Menza Girls’ Secondary School.

“It is my hope and prayer that this school will help our girls in the entire Coast region bridge the gap in education facilities,” Nassir said.

In a passionate letter to Mombasa residents, Nassir said, a vote for him is a vote to revive county’s economy.

Nasssir said that the Tuesday election gives Mombasa people a choice to choose between leaders who make empty promises and leaders who have been tried and tested.

“We have run the race and we have fought the fight for a better Mombasa. I am proud of the journey we have walked together so far and I look forward to what the future hold," he said.

“Ultimately, just like everything else in life, elections are about choices. August 9, 2022, presents us with an opportunity to make a choice.

"In this election, choose wisely, choose Abdullswamad Sherrif Nassir as your governor for Mombasa."

The Mvita legislator added that Mombasa is what it is today because of its people saying that the county houses all various communities in Kenya.

“Mombasa is home to all of us, every religion, ethnicity and background, belongs here,” he said.

In what seemed to be a swipe at former Nairobi governor Mike Sonko Nassir said there have been prophets of doom who tried to seek office by sowing seeds of divisions and hate but failed in their quest.

“I have campaigned without insulting or abusing anyone. What I have to offer is my promise of good governance and my vision for a new Mombasa,” Nassir said.

He further called on Mombasa residents to turn out in large numbers to vote on Tuesday.

He said that in 2017, only 60 per cent of the total registered voters in Mombasa turned out to vote.

“Don’t think your vote does not matter, you matter. Raila Odinga needs you, I need you. Let’s do this together, our moment is now,” he said.

Wiper split between Nassir and Awiti after Sonko joins UDA

Some candidates reject the party's decision to back the Mvita MP for governor seat.
Counties
1 month ago