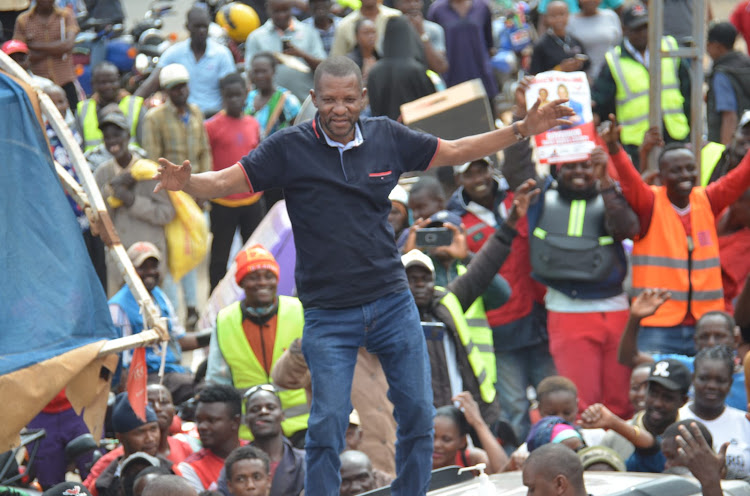 Taita Taveta gubernatorial hopeful Andrew Mwadime has asked his supporters not to be swayed by propaganda being peddled by his opponents.

He said some of his opponents have now resorted to a door-to-door smear campaign aimed at tainting his image.

Mwadime said they are misleading voters in his strongholds on how to mark the ballot papers to spoil their votes.

“They have realised that we are leading and they cannot steal our vote. Sadly they are asking my supporters to put many marks on the ballot paper, knowing that it shall be a spoilt vote,” he said.

He asked voters to put only one mark on the ballot paper against their preferred candidate.

While winding up his campaign on Saturday at Voi bus park, the Mwatate legislator expressed confidence in beating the incumbent Granton Samboja.

He rallied the Voi residents to come out in large numbers and vote for him, promising to create a good business environment in the once vibrant town.

“We have a plan to lower the cost of business licenses and bring back investors in the transport sector who were pushed out of the town. We must make Voi a business hub once again,” Mwadime said.

His administration, he said, will build on the existing successes in agriculture explore and encourage other farming activities like horticulture and macadamia.

Mwadime, an independent candidate, said he will encourage farmers to embrace the use of modern farming technologies in a bid to alleviate food shortage cycle experience in the region.

Further, Mwadime promised to diligently deal with corruption, a vice that he said is deep-rooted within the devolved unit.

“We promise visionary leadership and integrity in governance by eradicating corruption in our county. We promise an all-inclusive governance system without discrimination,” he said.

His running mate Christine Saru said they will formulate a policy to train and employ more ECDE teachers once elected.

She said their administration will set aside a sufficient budget for bursaries for needy bright students in secondary schools, universities and colleges.

She further promised to streamline service delivery in the health sector through equipping and expansion of existing hospitals, so as to provide affordable, accessible and quality healthcare.

“We will build and rehabilitate existing dispensaries and health centres so that we provide quality and affordable service closer to our people,” Saru said.

In industrial mineral mining, the duo committed to exploring the sector by partnering with miners to generate revenues and create employment for the unemployed youth.

Saru said they will prioritise operationalisation of the Voi Gemstone Value Addition centre to minimide the exploitation of small-scale mines by brokers.

Mwadime will on Tuesday battle out with the other 12 candidates in the gubernatorial race.