Ruto tells off Uhuru for calling him a liar

President Uhuru said his deputy has been thriving on lies and unfair tactics. 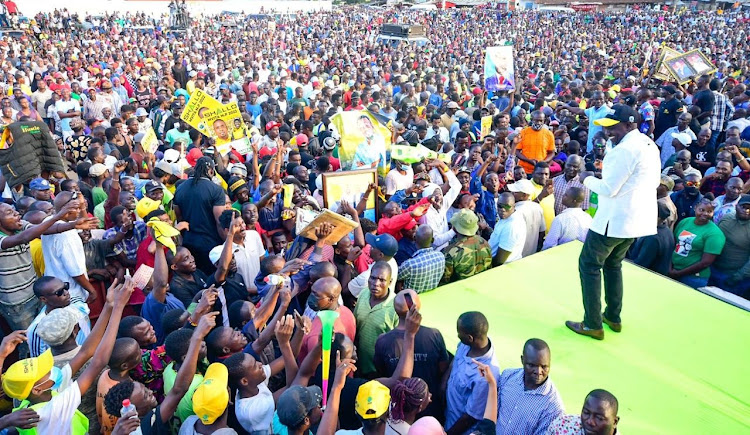 Earlier on, the Deputy President had accused the government of trying to stop the rally because of President Uhuru Kenyatta’s tour to the region.

The Head of State had been scheduled to open the Sh4.5 billion Makupa Bridge, whereas the DP was scheduled to hold a rally at Tononoka grounds.

Ruto arrived at Tononoka grounds at 5 pm, just a few hours after President Uhuru commissioned the Makupa Bridge at 3:30 pm.

Uhuru said his deputy has been thriving on lies and unfair tactics, which he said cannot enable him to lead the nation peacefully.

“There are others who said that programmes and work of the government stopped in 2017. That nothing has been going on in government because of the handshake,” said President Uhuru.

“I have said most of the time that I don’t like lies. If you are a liar, and you are not fair to others, then you are not a leader.”

It was the fourth day in a row this week that President Uhuru scathingly attacked his deputy. On Wednesday, he attacked him in Kisii.

While addressing the Tononoka rally, Ruto told President Uhuru that he is not a liar and has always stood by what he has said.

“I have heard the President saying that I’m a liar, I want to tell him that I’m a decent man and I do not lie like you know who,” he said.

Ruto said “Whether people like it or not, they (Jubilee) wasted four years because of a handshake.”

“Five years were wasted whether people agree or not. Kenya shall never experience a moment like what we experienced in the last four years,” said Ruto.

“All our programmes of the Big Four Agenda were disrupted by the handshake. Raila came with the BBI reggae, and they were chest-thumping saying no one can stop reggae, but it was stopped.”

Ruto wooed the Mombasa residents saying they in Kenya Kwanza are determined to take the country to the next level.

He talked about reverting the port services back to Mombasa immediately after taking over leadership after the August 9 general election.

“You (Raila) are being sponsored by the people who took port operations from Mombasa to Naivasha. You have no capacity to bring the port operations back to Mombasa,” he said.

“Stop lying to the people of Mombasa, you are a hostage of those people who cost Mombasa this much pain.”

Ruto also pledged to resolve the land problem at the coast once elected.

Ruto had alleged the State is planning to block him from using the Tononoka grounds.
News
1 week ago