Kenya Red Cross to deploy 600 volunteers in Mombasa during polls 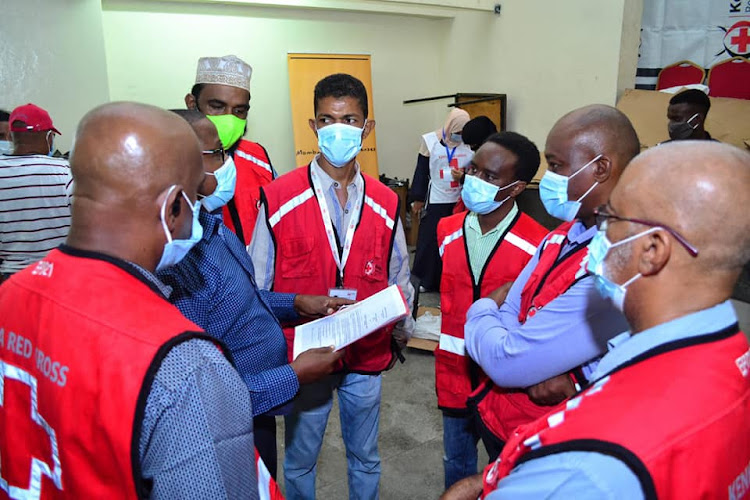 The Kenya Red Cross Society  will deploy 600 volunteers in Mombasa as responders to emergencies during the election week.

Each of the 30 wards of Mombasa county will have 20 volunteers, who have already been trained in handling emergencies, KRCS Mombasa branch coordinator Mohammed Rajab said.

In an interview with the Star, Rajab said KRCS will establish a command centre at the regional offices, where they will be coordinating all the rescue services.

He said the command centre will be manned by 10 people and an additional 10 people will be stationed at the subcounty level.

Rajab said the team at the subcounties will be coordinating those working at the ward level.

“We have developed our operation order for Mombasa and we are currently populating the list of responders who will support during the elections emergency response.”

He said the team of responders will be deployed from August 6 and be on standby throughout the election period.

The teams of the responders will include; trauma counsellors, medical doctors, first-aiders, and Emergency Medical Technicians among others.

“All our teams are well trained, we have an integrated team of doctors, EMTs and other professionals who will be joining us in rescue operations,” he said.

According to KRCS, they have already identified some of the violence hotspot areas within Mombasa, where responders will be on high alert.

They have identified volatile areas in all the six subcounties of Mombasa; Nyali, Kisauni, Changamwe, Jomvu, Likoni, and Mvita.

“We have also established safe zones in the subcounties,” Rajab said.

Kenya Red Cross Society Mombasa has also trained all the 30 chiefs in the county on disaster management and first aid.

On July 20, Interior Cabinet Secretary Fred Matiang’i directed that more police officers be deployed to the Coast region to heighten security ahead of the August 9 general election.

He said intelligence reports had flagged out politically-linked mobilisation of gangs and other illegal groupings that could pose a security threat in at least two counties in the region.

Speaking after chairing a meeting of the Coast region security chiefs in Mombasa, Matiang’i said additional officers and more equipment are expected on the ground.

“I have asked the regional security teams to raise the level of security alertness to ensure we facilitate effective participation in the general election. We are bringing up special additional resources to back up their work and planning,” he said.

The Interior CS said the government is determined to ensure peace will prevail in a region that has a history of election-related unrest and that it will crack down on illegal gangs and the politicians sponsoring them.

“We have players in two counties that may be tempted to amass small groups that could engage in crime. My simple advice to them is not to try because we’re watching closely,” he said.

“I have asked the security team to act very decisively on any individual politician who tries to do that kind of a thing.”

We urge voters to think with their heads and not hearts when making their choice of leader.
Opinion
2 weeks ago

Kenyans will be able to confirm the places where they will cast their ballots.
News
2 weeks ago

The commission says last batch of ballot materials will arrive in the country on August 3.
News
2 weeks ago
“WATCH: The latest videos from the Star”
by CHARLES MGHENYI Chief Correspondent, Coast Region
Coast
02 August 2022 - 22:00