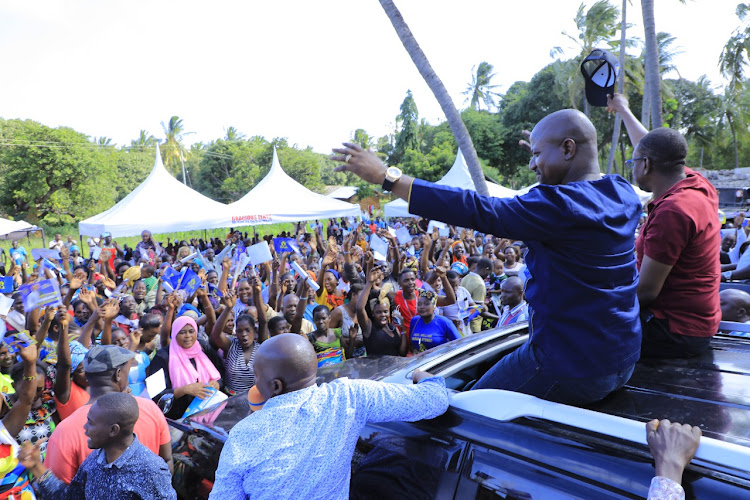 Land titling and ending squatter problems have dominated the Kilifi governor race as the date to the August 9 polls nears.

While the ODM candidate Gideon Mung’aro, a former Lands CAS in President Uhuru Kenyatta's administration, has been busy issuing title deeds, Pamoja African Alliance candidate George Kithi assured residents of Kilifi that once elected there would be no demolition or eviction of squatters.

Addressing a series of rallies in Malindi constituency, Kithi and his brigade said their administration will set up a kitty to acquire land belonging to absentee landlords so as to resolve the land issue amicably.

The Kilifi governor hopeful said as a lawyer, he would not allow residents to suffer again and announced that any tycoon who would forcibly evict squatters under his watch could lose his land.

“The government has the responsibility to ensure its people live on land,” he said, adding that anyone claiming ownership of a parcel of land must show the ownership documents.

Kithi warned the land grabbers that their days are numbered as once elected no one will be allowed to come and demolish houses for Kilifi people.

“As the governor, I say this even if one has court orders to evict people, he must go through the office of the governor, there will be no demolition. Its a security issue to demolish people’s houses, whoever has complaints over land which is a devolved function, will have to go through the governor to allow or disallow it,” he said.

Kithi said the tendency of land owners from Nairobi or anywhere else in the country to demolish houses will become a thing of the past.

He said land owners must surrender their title deed and will be paid their money to ensure residents get land ownership documents and live peacefully.

“The issue of threatening people will not be tolerated anymore the squatter problem is something created, once you get titles you will be able to uplift your living standards,” he said.

Mung’aro on the other hand said people should stop politicising the land issue in Kilifi, adding that there are so many problems affecting people.

Speaking in Ganze when issuing title deeds, Mung'aro said during his tenure as Lands CAS, he spent a lot of time ensuring residents get land ownership documents.

In Magarini alone, he said they set up 22 land settlement schemes and there are 14,000 title deeds that are ready.

“If you are given a chance to serve in government with authority do it so that even when you exit the people shall benefit from your efforts,” he said.

Maitha the Pamoja African Alliance Party Spokesman said as leaders they formed PAA  to address the historical land injustices in the Coast region.

He said during the post -election violence in 2007, the government under President Uhuru Kenyatta bought land and settled all IDPs who had been affected by the ethnic violence.

Maitha said PAA is tired of the fake promises that land issues will be addressed and called on residents to vote for all PAA candidates in Kilifi  to push the agenda and resolve it completely.

“I would like to urge candidates for MPs and Woman Rep in PAA to ensure once elected you push the president to set up a budget for settling squatters in the Coast region,” he said.

Zawadi who is currently serving as a Nominated senator but is eying the Woman Rep Seat on a PAA ticket told Kithi to ensure the squatter problem is completely addressed once elected as governor.

Residents who got title deeds in Ganze thanked the government for issuing the land documents saying successive governments had failed but President Kenyatta’s regime has helped them get the documents. 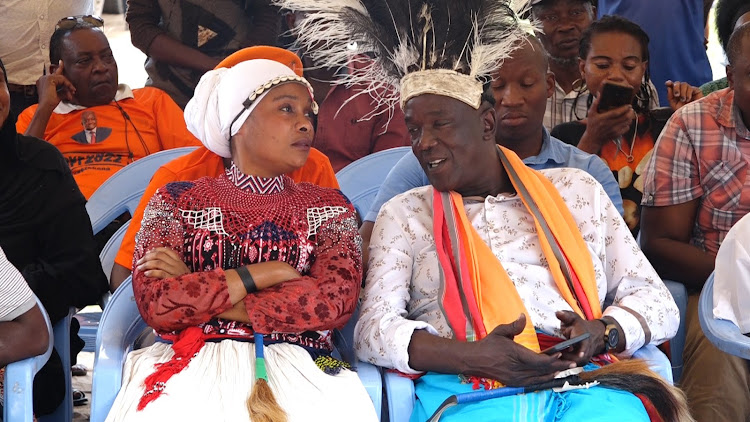 Environment and Land Court was formed after the 2010 Constitution and started operations in 2012.
Counties
3 weeks ago

Only three of the eight candidates cleared by IEBC in Mombasa attended.
Counties
2 months ago
“WATCH: The latest videos from the Star”
by ALPHONCE GARI Correspondent, Coast Region
Coast
02 August 2022 - 22:00
Read The E-Paper