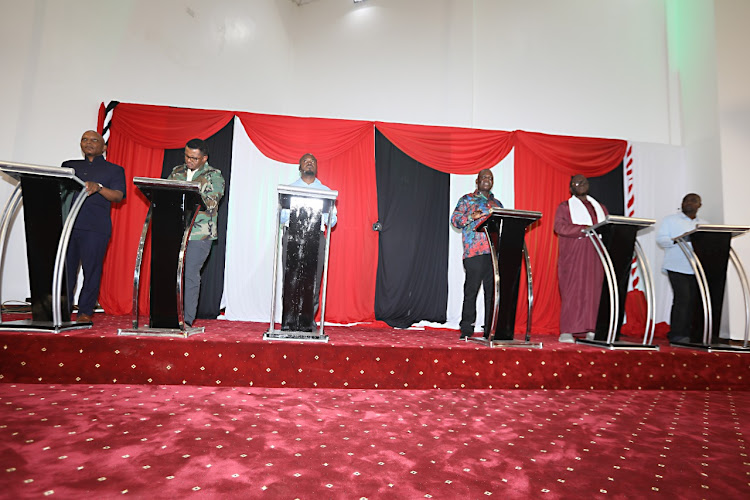 Abdulswamad Nassir (ODM) did not show up.

Mike Sonko, who had also been invited, did not show up because of the latest development in his case at the Supreme Court, which upheld his impeachment as Nairobi governor in December of 2020.

The debate was held at the Kenya School of Government, Mombasa.

Years back, Mombasa was gripped by a wave of terrorist attacks by suspected local youths who had been radicalised after being recruited into al-Shabab.

However, in the recent past, incidents of terror attacks have since gone down replaced by an increased formation of juvenile gangs that terrorise residents in Kisauni, Likoni and Nyali subcounties.

Former Mombasa senator Omar said radicalisation is an issue of faith and, therefore, there will be a need to harmonise the Madrassa programme.

“Radicalisation is a question that ties to matters of faith. We will involve the Muslim religious leaders in terms of coming up with a less radical interpretation of the Quran,” he said.

Omar said unemployment has also led to increased cases of radicalisation in the Coast region, hence the youth should be helped in security jobs.

“That is why in the Kenya Kwanza government, we have promised to implement the bottom-up programme in the first six months after the election. This will target the youth at the bottom and give them funds to start businesses,” the former senator said.

Omar said Mombasa county will work with the national government to provide general amnesty to radicalised youth and have them rehabilitated to fit back into society.

“I have been a human rights actor. I will provide the confidence to the youth to surrender to the government, where we will help them deradicalise,” he said.

The former senator also said the notion that Mombasa youth are lazy is "systemic marginalisation" meant to steal resources from the region.

“We are not lazy people. I was born here and work very hard. It has been done intentionally to steal the resources of the people from the region,” he said.

Kingi, who is the current Mombasa deputy governor, said the biggest problem of radicalisation in the Kenya coastal towns is hopelessness among the youth.

“The youth have no hope. We need to treat the ailment and not the symptoms. The biggest problem in Mombasa is that youth have no jobs, hence becoming hopeless.

Kingi, a former lecturer at the Technical University of Mombasa, said the primary to secondary transition rate is at 40 per cent in Mombasa.

“This means that 60 per cent of students do not transit to secondary school, which is very high compared with other counties that have 100 per cent transition,” he said.

He said due to lack of education among the youthful population, unemployment in Mombasa stands at 43 per cent, which is very high compared to the national average of 23 per cent.

“We need to first give these youths education, train them for skills before we give them employment,”  the PAA candidate said, adding that the youth in Mombasa are not lazy to take up employment.

“The problem they have is the requisite skills to be employed and for self-employment.”

To provide employment, Makazi said, there is a need to come up with a plan to invest in other sectors of the economy to avoid over reliance on port business and tourism.

“Agricultural sector has been neglected in Mombasa.  We should invest in agriculture to provide our youth with more job opportunities,” he said.

Abdhalla, the former vice chairman of the Islamic Party of Kenya, which reigned havoc in the early 1990s, said radicalsation started a long time ago.

“I was in IPK as vice chairman. Extra-judicial killings are the reasons why we are having the problem of radicalisation. Killing the youth is not an answer to this menace,” he said.

Awiti, a businessman and the former Nyali MP, said youth engage in violence because they have been not been given a chance.

“We are not giving youth a chance to do what they are supposed to do. Youth have been left out. The money is in the hands of a few individuals,” he said.

Kitsao said the next Mombasa county administration has to make sure youth get education and employment.

“Our people need to get education. They should see the importance of education,” he said.

Sonko will never be cleared to vie for any elective seat in Kenya.
News
2 months ago

The ruling means Sonko can not be allowed to run after exhausting his appeal.
News
2 months ago