He said this will ensure that the ODM Party carries the day in Mombasa.

•Speaking at the rally on Wednesday, Odinga called on his supporters to embrace six-piece voting.

•He was accompanied by his running mate Martha Karua who pledged that the Azimio government would restore business at the Mombasa port. 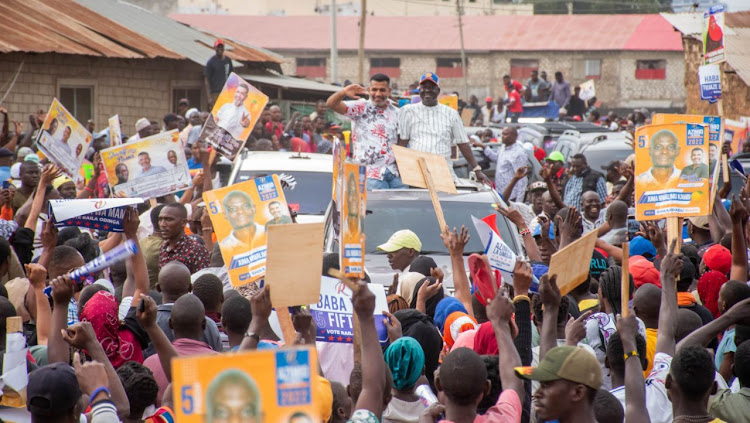 This, Raila said, will ensure the party carries the day in the county in the August 9, General Elections.

“I don’t want to be a General without an army. I need my foot soldiers in the County Assembly, National Assembly, Senate and most importantly, the Governor so as to be able to deliver on my vision for the country,” Raila said.

On his part, ODM candidate for Mombasa Governor Abdulswamad Shariff Nassir committed to combing every blade of grass in the entire county to rally the people of Mombasa to enable 95 per cent turnout in the election to ensure victory for Azimio.

Raila was accompanied by his running mate Martha Karua who pledged that the Azimio government would restore business at the Mombasa port.

The plan, she said, is to have Mombasa, Lamu, and Kisumu ports work in synergy with the inland container terminals.

Raila said he had also discussed with Nassir how to actualize jobs at Dongo Kungu special economic zone.

The leaders at the same stop asked William Ruto to declare publicly that he'll concede defeat should Raila win, with the Azimio leader pledging to do likewise.

Raila raised concerns about the high number of undecided voters in Mombasa.

He urged the residents of the bastion that has backed his bid three times not to give up.

"We are almost there. It is a matter of a few days. Don't give up when victory is nigh. We have never been this close as is today," he pleaded.

Previously, ODM candidates would slow down their campaign momentum after winning nomination.
Counties
2 months ago