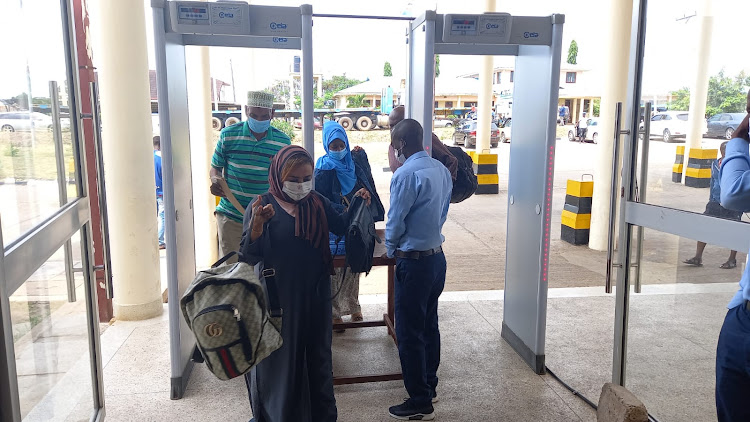 SURVEILANCE Traders pass through a screening machine at the Lunga-Lunga One Stop Border Post in Kwale on Wednesday, June 21, 2022.
Image: SHABAN OMAR

The Kenya Revenue Authority has reported a sharp decrease in smuggling along the Kenya-Tanzania one-stop border post in Lunga Lunga.

The KRA officials said the total value of seized goods at the border has significantly gone down.

Changole attributed the drop to the enhanced continuous civic education and awareness campaigns of traders and border communities.

"Sustained taxpayer education and simplified procedures on the OSBP operations has promoted maximum compliance by traders and minimised the use of porous routes," he said.

The taxpayer education targeted the cross border and local traders who are now passing through the border with imported items from Tanzania unlike before.

Changole said motorcycles were commonly used to smuggle goods in and out of the two countries.

He said sometimes the small traders would risk their lives to smuggle the non-tax items because of the negative perceptions about the border operations.

The exports were semi-finished and finished products (23 per cent), soaps (17 per cent) sodium silicate and bi-carbonates (11 per cent).

The Lunga Lunga OSBP construction was completed in 2016 and came into full operation on September 1, 2021.

Changole said since the facility became operational, the growth of productivity and efficiency has improved.

"The concept of joint border coordination between the two states has stabilised efficiency in the movement of persons and goods because of consolidated streamlined requisite procedures and paperless work of clearance of cargo at the border," he said.

He said the infrastructure paves way for smooth and logical clearance processes of passengers, vehicles and consignments.

Changole added that the clearance procedures have been made so easy to an extent that small-scale traders carry transactions without necessarily engaging the clearing agents, hence promoting compliance.

He said the new facility has made the traffic flow of goods and passengers grow by 166 per cent from September 2021 to January 2022 compared to the same period in the preceding year.

The customs officer further said that previously they were some delays because of sophisticated vast clearance procedures at the border.

"As you all know we used to have two borders that were five kilometres apart. The traders were subjected to repeat the same long processes in each border and it was hectic," he said.

Changole said the OSBP has brought working synergy and compounded clearance structures that have contributed to an effective mode of an extra-territoriality system of operations.

He said the facility is well equipped with modern offices, enough water supply, staff and technology which have boosted information and intelligence sharing.

Changole added that the enhanced tax borders operations are also linked to the increased revenue collections.

It is upon Kenyans to also ensure we uphold the law and proper standards.
Opinion
3 months ago

KRA says expansion will ease congestion at the customs yard during heavy traffic.
Counties
4 months ago
“WATCH: The latest videos from the Star”
by STAR REPORTER
Coast
05 July 2022 - 22:00