Applicants had sought to be enjoined in the case arguing it was due to public interest. 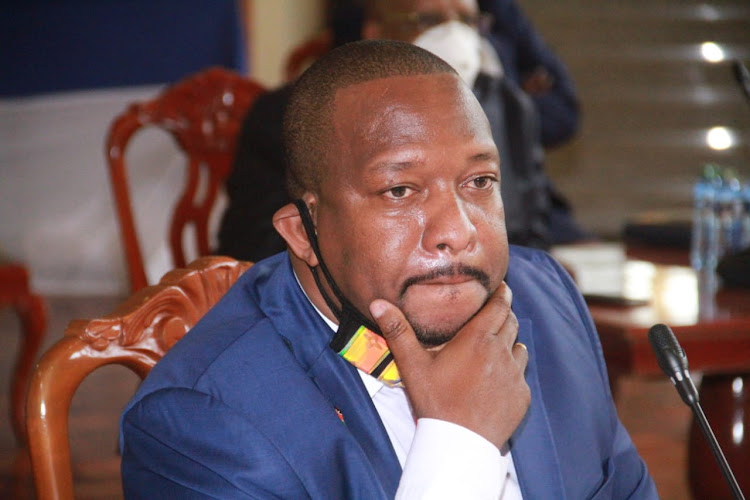 A High Court sitting in Mombasa on Tuesday evening barred two Mombasa residents who wanted to be enjoined in a petition filed by former Nairobi Governor Mike Sonko against IEBC.

Sonko is challenging the IEBC Disputes Resolutions Committee's verdict that disqualified him from vying for the gubernatorial seat in Mombasa County.

The two applicants; Mukithi D and Anderson Warui had sought to be enjoined in the case, arguing that it was due to the public interest of the case that they wanted to take part in the petition.

The two had argued that the ex-governor is not qualified to vie for the gubernatorial seat since he was impeached, and had been found guilty of gross violation of the constitution.

The three-judge bench of Justices Olga Sewe, Ann Ong'injo, and Stephen Githinji struck out their petition, saying it had not met any requirements to guarantee the request.

"It was plain to us, their interest is remote to the case. They have shown no personal stake in the case and only want to champion public interest," said Sewe.

Further, the bench said that the duo's public interest was not sufficient to enjoin them in the case.

At the same time, Sonko's legal team, led by Wilfred Nyamu, asked the court to be allowed to file extra affidavits and submissions on Wednesday before the hearing could start.

"We are seeking leave to file a supplementary affidavit and a video file as well by tomorrow 11 am," Nyamu told the court.

However, IEBC's counsel Edwin Mukele said they were ready to continue with the case as it is, even with oral submissions, without extra affidavits by the Sonko.

"This is an extremely urgent matter, more so in the view of IEBC. We have received communication from the company printing the ballot papers in Greece.

"Because of the conservatory orders, they will face extreme difficulties in the printing and delivery of the papers. Printing ballot papers include logistics," Mukele argued.

Further, Mukele said that even though the IEBC DRC had seen the videos that Sonko's lawyers wanted to submit, he was yet to be served with the videos.

Mukele suggested that the hearing of the case continues on Tuesday afternoon, and said that IEBC was contemplating challenging the conservatory orders issued by the court on Monday.

"We intend to put an application in a certificate of urgency to stay the orders that were issued yesterday (Monday), and even to review those orders," he said.

“The orders issued yesterday stand to jeopardise the polls. The Constitution has only one day. I wish we could continue today.”

Eunice Lumallas, another counsel in Sonko's legal team dismissed claims by Mukele that the case might compromise the August 9 elections.

"We're okay with the written submissions. We are in Mombasa and we are not in a hurry to leave. We can continue with the case tomorrow at 1 p.m.," she said.

Lumallas accused the IEBC legal team of using the election calendar to intimidate the court into ruling in their favour.

She cited the case that the National Super Alliance (NASA) lodged in 2017 against the IEBC.

"In this case, a ruling was made that cancelled the entire tender process in July, and IEBC had to go back to the tendering stage. We can't sacrifice democracy for expediency," she said.

Dr John Khaminwa, another lawyer representing Sonko asked IEBC and the EACC to obey the orders of the court, regardless of their possible consequences.

"Our duty is to obey the orders you gave yesterday. There is a rule of law. We can't mitigate the rule of law because of commercial interests," Khaminwa said.

“IEBC ought to have anticipated such rulings because they have been party to this case since its inception.”

The judges ruled that Mike Sonko files the supplementary affidavits by 9 am on Wednesday.

Furthermore, the bench directed that all the respondents in the case file their affidavits by 11 am on Wednesday.

The hearing of the case will start on Wednesday at noon, and each party shall be given 30 minutes to deliver their submissions.

Judgement of the case is expected to be delivered on Friday.