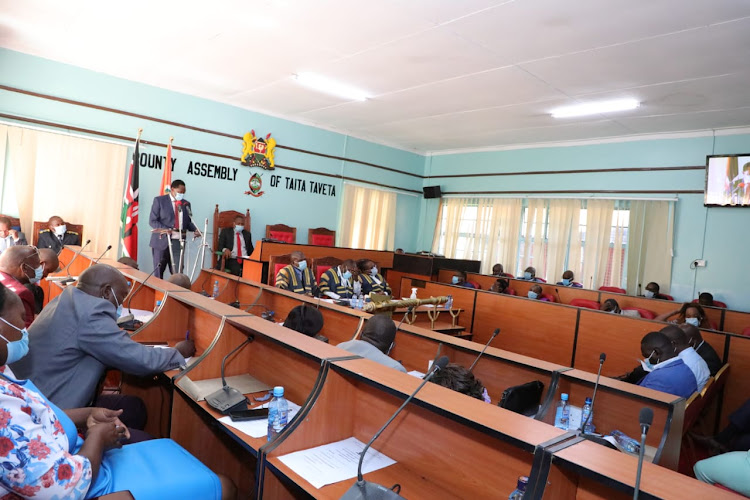 The members of the Taita Taveta County Assembly during a sitting
Image: SOLOMON MUINGI

The members of the Taita Taveta county assembly on Tuesday proceeded on a recess ahead of the polls, ending the life of the second assembly.

Deputy speaker Crispus Tondoo, who presided over the last sitting lauded the ward reps for performing their duties of representation, legislation and oversight.

He said the assembly had performed exceedingly well in the last five years especially on putting the Executive in check.

“All the ward reps have exercised teamwork in the entire tenure. This has enabled us to play our oversight role well,” Tondoo said.

The Bomeni MCA said the House will no longer hold regular sittings until after the general election.

“However, pursuant to Taita Taveta county assembly Standing Order No 27, we may convene to transact urgent and exceptional important matters of the county,” he said.

The deputy speaker wished all members well in their campaigns, further asking them to maintain peace.

The ward reps are now expected to intensify their campaigns in a bid to retain their seats.

Out of all the 20 elected MCAs, only Godwin Kilele will not be defending his seat. The Sagalla MCA is eying the senatorial seat on a Jubilee ticket.

The MCAs paid tribute to four ward reps who died since the 2017 election.

They are ODM’s nominated MCA Anastaciah Wakesho and Wundanyi-Mbale MCA Beatrice Mwabili (ODM) who both succumbed to cancer in December 2019 and March 2020 respectively.

The second assembly will go on record for its botched attempt to impeach Governor Granton Samboja over budgetary differences.

On October 9, 2019, the MCAs pulled a shocker by impeaching Samboja following a three-month budget impasse.

He would later be reinstated by the Senate through a report by a special Senate committee led by Embu Senator Njeru Ndwiga.

In retaliation, Samboja collected more than 52,000 signatures in a petition to President Uhuru Kenyatta to dissolve the county government.

According to political analyst Geoffrey Kimonge, the budget stalemate was the worst to have happened in the county.

“What happened after the impasse has haunted the ward reps until today. They were totally compromised and have never been able to execute their duties well,” he said in an interview.

Kimonge said the county needs to elect bold MCAs who can stand and defend the interest of the electorate.

Further, he noted that the assembly has failed to flag the misappropriation of funds by the Executive, creating an open door for corruption.

“The Assembly should only take credit for the few bills and policies that they have made but not anything to do with oversight,” he said.

He said many sitting MCAs might not retain their seats due to poor performance.

Help miners get licences to mine in Tsavo, Ruto told

The Members of County Assembly are accusing the governor of gross misconduct.
News
2 years ago

Samboja was impeached over what MCAs described as 'gross misconduct'.
Counties
2 years ago
“WATCH: The latest videos from the Star”
by SOLOMON MUINGI
Coast
22 June 2022 - 22:00