They were charged for allegedly allocating Sh30 million parcel of land. 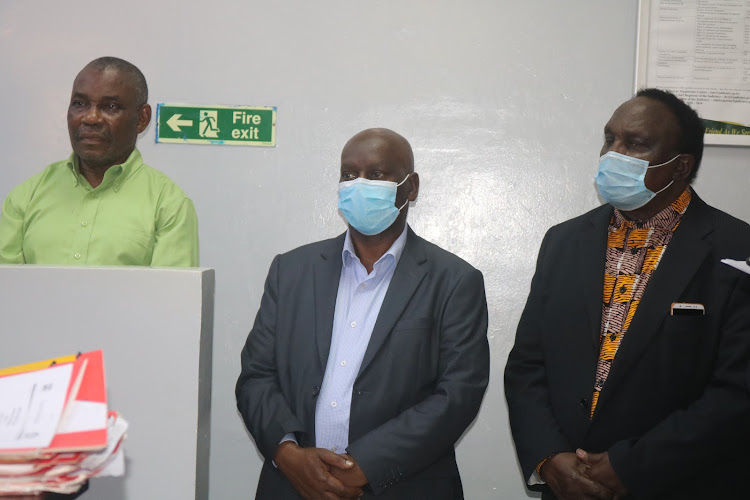 Jabu Salim, Zablon Mabeya and Wilson Gachanja arraigned in Court before Principal Magistrate Martin Rabera where they were charged with misuse of public office among other counts
Image: AURA RUTH

The three senior former land officials, who were arrested on Monday morning by the Ethics and Anti-Corruption Commission (EACC) have been released on bail.

They were arrested for allegedly facilitating the illegal acquisition of public land by private developers.

They were charged for allegedly allocating  Sh30 million to a parcel of land- Kwale Diani/Beach Block/1072, which had been set aside as a public access road, to a private developer.

According to court documents seen by the Star, the three former officials were charged with nine counts, among them abuse of office, willingly neglect of official duty, and aiding the commission of a felony.

They all denied the charges and were each released on Sh200, 000 cash bail or an alternative Sh1 million bond with the same amount of surety.

They are expected to appear before the court again on July 4.

Earlier on, EACC Chief Executive Officer Twalib Mbarak told journalists in Mombasa that three former officials were arrested for illegally allocating a parcel of land after the Director of Public Prosecution Noordin Haji Okayed the charges.

Mbarak said the land in question was allocated to Galere investment.

The parcel of land is located in Diani Beach in Msambweni.

Speaking at PrideInn Paradise Hotel Mombasa, Mbarak said what they are learning from the charges levelled against the trio is that EACC will not get deterred by the longevity of when the crime was committed.

“We are right now in the political transition and we are having information that counties and senior officials in some areas in the national government are trying to do things which are illegal. We want to warn them that the law will catch up with them,” he said.

He said they have information that some people in county offices are trying to employ more people before they leave office.

“Some people are trying to approve suspected pending bills, some are trying to prioritize what we call boardroom cooked projects. Whoever does this as a public official should know that we are just undergoing a political transition but the accountability as a government officer will still remain there,” he said.

“And any sort of malpractice, even if you have retired and it gets on you, you will be arrested, charged, and face the law.”

EACC warns governors against malpractices as elections near

"Some are trying to approve suspected pending bills and prioritising cooked projects,” he stated.
News
5 days ago

They are being taken to Integrity centre over Sh30m beach plot in Diani.
News
5 days ago
WATCH: The latest videos from the Star
by AURA RUTH
Coast
21 June 2022 - 01:03