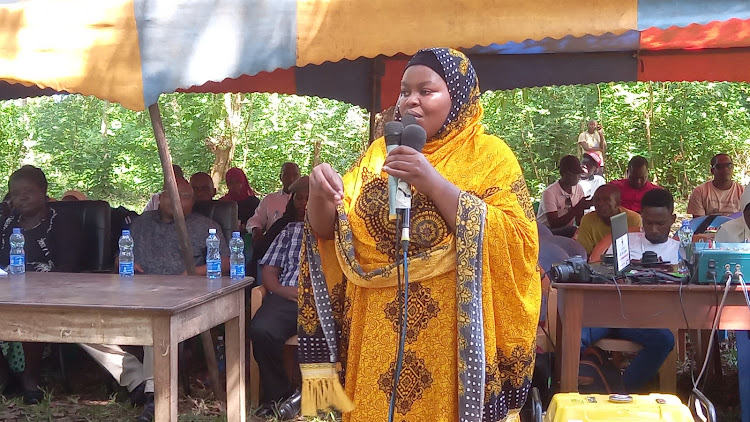 A group of widows in Kwale county are calling for inclusion into the development agenda.

According to Tuwajali Wajane director Mwanasha Gaserego, the widows want issues affecting them to be part and parcel of the ongoing political campaigns.

The organisation assists women in fighting for inheritance, property rights and empowers them socio-economically.

At least 821 widows are registered with the NGO within the constituency, but there are more widows in the county.

Gaserego said for years, the widows have been treated as the forgotten lot by politicians and a time has come to have their issues echoed and represented.

She said it has become a norm for politicians to take advantage of the vulnerable groups to achieve individual goals and not fulfil the promises they make.

"We want all that you speak about widows to be fulfilled. Let the pledges not end in papers but be put into practice too," she said.

She said widows are enlightened and are demanding proper inclusion in national development agendas.

Gaserego said they will use the network to bring all the widows together and stand against deceptive leaders.

The activist said the politicians and political parties must come openly and explain what the widows stand to benefit in their manifestos.

She said the widows have suffered a lot of injustice and there must be new policies and goals set to improve their lives.

She also called on the national government to include widows and vulnerable groups in employment opportunities.

Gaserego alleged most of the offices and committees established to address the challenges of the deprived groups are managed by people who are not affected.

She said it is a situation that leads to continued deprivation of the widows' rights since they are served by people who are not aware of what they are going through.

Msambweni deputy county commissioner Kipkoech Lutiatia, however, denied the allegations, saying the government has prioritised a lot in promoting the lives of widows and women.

He said the state has rolled out various empowerment programmes, including funds to benefit women.

"No one has been sidelined by the government. There are a lot of things done like the youth, NGAF (National Government Affirmative Action Fund)  Uwezo and CDF funds," he said.

Lutiatia, however, urged the widows to report any officer who violates their rights in employment opportunities.

The Sh9 million pilot project is funded by Aga Khan Foundation and will run for six months.
Counties
1 month ago

This is to help address challenges faced by the widows in the region.
Counties
1 week ago

200 widows to benefit from Fazil Chinoy fellowship in Kwale

The three-year programme targets to empower and fund young people and women to run sustainable projects
Counties
9 months ago
“WATCH: The latest videos from the Star”
by SHABAN OMAR
Coast
20 June 2022 - 22:00