Campaign is ongoing in Kwale and Kilifi counties which border the Indian Ocean. 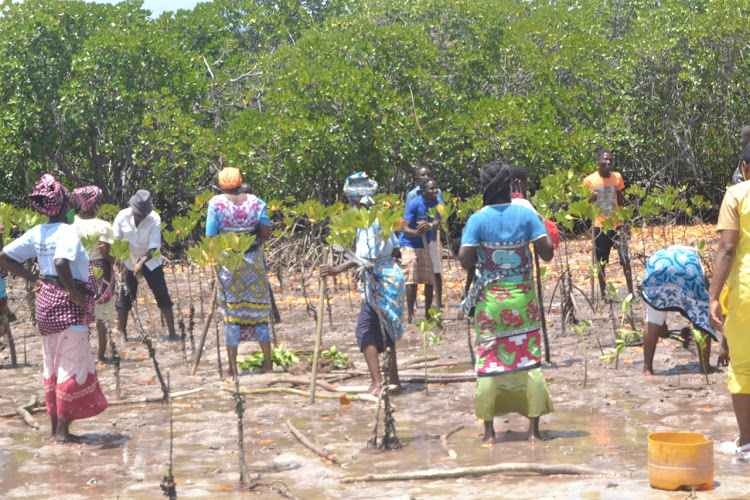 Community-based organisations at the Coast have planted 325,000 mangroves to mitigate the effects of climate change and uplift the region’s economy.

Rotary Club of Malindi and For Trees Club Organisation came up with the campaign that has been ongoing in Kwale and Kilifi counties that border the Indian Ocean.

The aim is to plant at least one million mangrove trees in the Coast region.

The project helps the community conserve the environment and also get an income.

Among the beneficiaries of the programme include Kirepwe Island in Watamu and women groups in Gazi Kinondo, Kwale.

Masinde said they are hoping to planting one million trees by June this year.

Currently, he said, they have managed to plant 325,000 trees, the majority being mangroves because of the weather conditions at the Coast, which are conducive for the trees.

"We have planted mangroves which are perfect trees for carbon-sequestering. The 325,000 trees that we have managed to do are able to remove 100,000 tonnes of carbon which is a big achievement," he said.

He added that they have planted more than 100,000 mangroves in Kirepwe Island in Watamu and more than 200,000 in Gazi, Kwale county.

"We have worked with partners. Absa Bank sponsored the project in Kwale and For Trees Club was our implementing partner," Masinde said.

To make the project sustainable, they came up with empowerment programmes that the community can benefit from.

In Kirepwe Island, he said, the community has a project on crab harvesting and in Gazi, they helped enrol the groups into the National Hospital Insurance Fund to access health care.

Masinde said they are trying to bring many partners together.

The project is in line with the Sustainable Development Goals and the national government’s plan to increase forest cover.

On his part, Cohen said they are celebrating the 10th week of planting mangrove trees along the Kenyan Coast.

"If everybody on earth planted 147 trees, we would fix global warming. So I encourage everybody to be part of the movement,” Cohen said.

study shows that by 2050, there will be more plastic in water than fish
Counties
2 months ago

Lamu is home to more than 60 per cent of Kenya's mangroves.
Counties
2 months ago

Mombasa has lost 30 per cent of its mangrove since 2010.
Counties
4 months ago

Mangroves in Lamu under threat from plastic waste pollution

Although mangroves adapt to plastic debris, too much can kill them.
News
5 months ago
“WATCH: The latest videos from the Star”
by ALPHONCE GARI Correspondent, Coast Region
Coast
14 June 2022 - 22:00