Awiti: Why I picked 28-year-old as my running mate 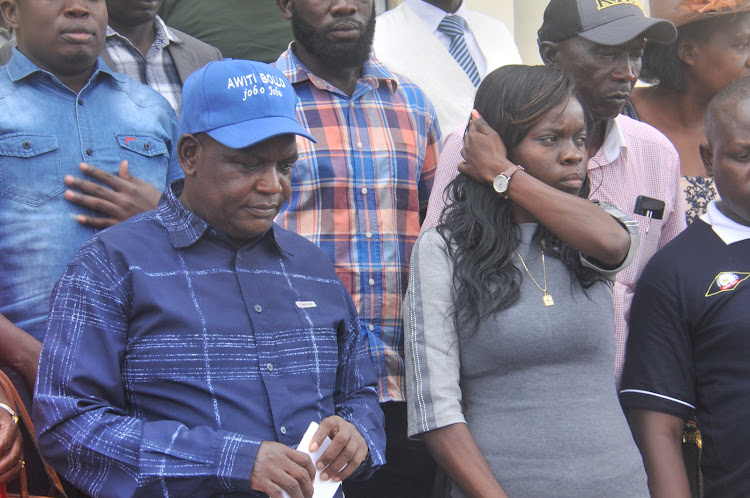 Former Nyali MP Hezron Awiti, has settled on 28-year-old Bethline Kadzo as his running mate in the Mombasa governor race.

Kadzo, a graduate of Jomo Kenyatta University of Agriculture and Technology, holds a Master’s degree in Procurement and Contract Management.

She also holds a Bachelor’s degree in Purchasing and Supplies from the same university.

Kadzo and Awiti were cleared to run for the Mombasa top seat on Monday by the Independent Electoral and Boundaries Commission.

Awiti, who is vying on Vibrant Democratic Party  ticket, is making a second attempt at the Mombasa governor’s seat.

He said his choice of running mate was informed by the issue of gender and also to allow the youth space on the leadership table.

“Together with my super deputy governor Kadzo, a youthful and vibrant woman, we want to liberate and revive Mombasa county,” Awiti said.

He described Kadzo as a young woman driven by the passion to promote women empowerment programmes.

She also stands to change the situation in the marginalised areas such as Mwakirunge in Kisauni, which have been forgotten for a long time.

Kadzo will help Awiti win the Mijikenda vote, who are the single largest community in Mombasa, and also attract women and youth to their camp.

Awiti said Kadzo’s experience in humanitarian work will help them address the needs of destitute women, the mama mbogas and small traders.

“Having her behind me will prove to be a perfect match. She is youthful, energetic, and experienced.”

Born in Nairobi in 1994, Kadzo is the last born in a family of three.

She however grew up in Kwale county.

She went to Msingi Bora Primary School in Mswambweni where she sat for her Kenya Certificate of Primary Education exam in 2006.

She later joined Lulu High School in Ukunda where she sat her Kenya Certificate of Secondary School exam in 2010.

She has worked as a volunteer with Gap Kenya, a humanitarian organisation working with street children in Mombasa and dumpsite families in Mwakirunge, Kisauni.

She has also worked with Compassion Care in Mombasa.

In an interview with the Star, Kadzo said she is up to the task of becoming Mombasa’s youngest deputy governor.

“My biggest focus is to build a society that promotes equality to ensure people get a better chance to develop both socially, economically and mentally," Kadzo said.

Being her first time in active politics, she said the journey has so far been interesting as she learns the ropes.

“I follow a lot of great politicians in Kenya like Awiti and others from outside Kenya, as I work towards building my political portfolio.”

She said she admires Awiti’s style of leadership, adding that he is mentoring a lot of young people in leadership.

“We want to come through for Mombasa people, give us a chance to work so that leadership can grow and Mombasa people can improve their lives,” she said.

The aspirant said he can only solve issues affecting women if he has one of them at the top of his administration.

“Issues affecting women are well understood by fellow women. My deputy promised to be there for women and the youth. She has promised to promote their small businesses to ensure we uplift their lives,” he said.

“Our commitment is to change this situation, not by giving handouts and wheelbarrows to our people, but by providing tangible opportunities to them.”

Awiti was the first Nyali MP in 2013 after the region was carved from the larger Kisauni constituency. He was elected on the Wiper party ticket.

In 2017, Awiti went for the Mombasa governor seat on VDP but lost in the election coming in a distant fourth.

Awiti, Kingi turned away, told to put papers in order

They are scheduled to return to IEBC offices on Monday and Tuesday respectively.
News - Page 8
2 months ago

The former Nyali MP is making a second attempt on the governor's seat
Counties
2 months ago
“WATCH: The latest videos from the Star”
by ONYANGO OCHIENG
Coast
12 June 2022 - 22:00