The leaders were at the dais when rowdy youth stormed the stage. 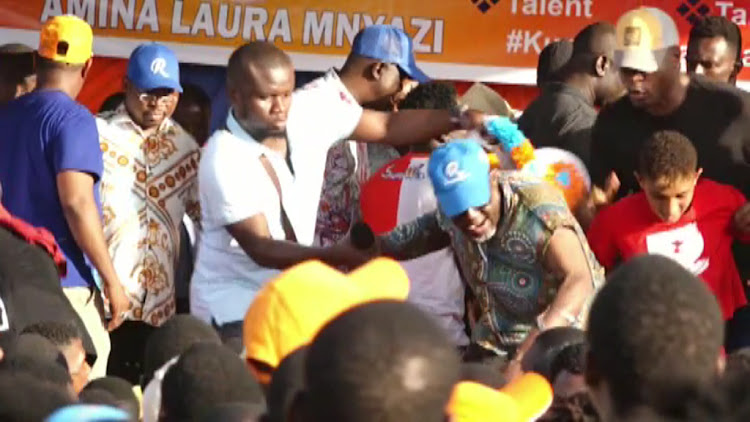 Kilifi Deputy Governor Gideon Saburi is pushed down the stage during the Azimio Rally in Malindi.
Image: ALPHONCE GARI

The Azimio la Umoja One Kenya Coalition rally in Malindi ended prematurely after ‘goons’ stormed the dais at Cleopatra grounds.

Kilifi County Deputy Governor Gideon Saburi, who was making his final remarks, was almost knocked down by the rowdy youth.

The leaders were on the dais when the rowdy youth stormed the stage.

Saburi’s aide David Sharif was knocked down while Joho's allies protected Saburi from the attack.

Joho and Mung’aro helped women leaders to leave the stage before the other VIPs left the dais in a huff.

Before the meeting ended abruptly, Joho and Shaban led the leaders in drumming up support for Raila Odinga’s presidential bid.

The Malindi meeting happened just a day after Deputy President William Ruto held a rally at Msabaha grounds in Malindi.

Shaban said she was confident that if Raila clinches the presidency, he will move the country forward unlike DP Ruto.

Joho also took issue with Kingi for criticising Raila after he promised to appoint him (Joho) as Lands Cabinet Secretary if Azimio la Umoja forms the next government.

“If I get into the land's office, all those things that have not been done for those years, I will work on that,” he said.

Mung’aro said Kilifi has suffered for ten years because of poor leadership.

He also said the county government of Kilifi has failed in the health sector, which has led the county to depend on Mombasa for critical services such as ICU.

Junet asked the DP to stop demeaning Karua by calling her names.
News
1 month ago

The president's aggressive succession plan marred by blunders and miscalculations.
Siasa
1 month ago
WATCH: The latest videos from the Star
by ALPHONCE GARI Correspondent, Coast Region
Coast
27 May 2022 - 14:36