Community chairman Samuel Karisa says each ponds has 6,000 fish stocks, they sell a kg of Tilapia at Sh400

• The project initiated by the Kitinda NGO in 2019 is now a subject of research by the Kenya Marine and Fisheries Research Institute.

• KEMFRI drilled three boreholes as a pilot and after success of the project they added five more.

The Kenya Marine and Fisheries Research Institute has embarked on research on fish farming in Arid and Semi-Arid Lands (ASALs) among other areas across the country. 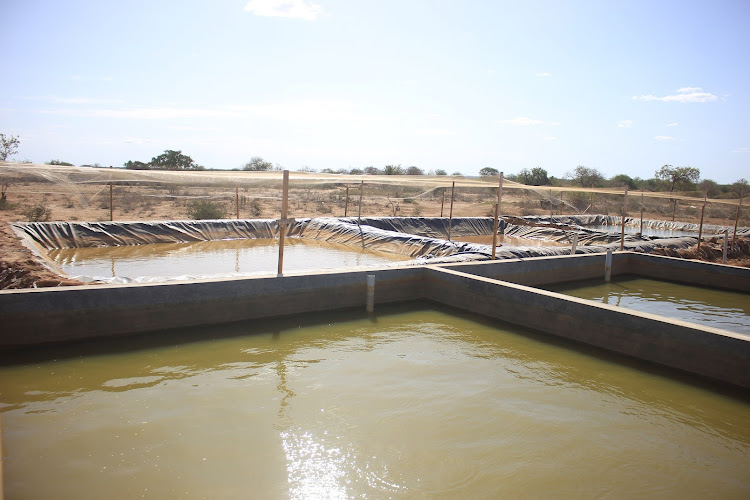 One of the eight fishponds at Kavunzoni village
Image: ELIAS YAA

The project initiated by the Kitinda NGO in 2019 is now a subject of research by the Kenya Marine and Fisheries Research Institute.

On Monday, during the official commissioning of the boreholes, KEMFRI deputy director James Njiru said the project was unique and urged the community to give the institute land to establish a research centre.

“This project is one of a kind and we wish to carry more research here. To do this we must establish a research centre. We are ready to partner with the community to make this a success,” Njiru said.

Ganze MP Teddy Mwambire welcomed the move and appealed that the institute should partner with the community in the initiative.

Mwambire said the project was designed for water and sanitation but later changed to aquaculture.

“When the NGO visited this area they found that the biggest challenge here was water. This area is normally very dry. To address the issue, Kitinda approached the county for a hydrogeological survey to sink a borehole," he said.

"After the borehole was sunk the water was too salty for human consumption. That is when we approached KEMFRI to try fish farming."

The MP said he is in consultation with other partners to introduce sunflower farming and bee keeping.

KEMFRI drilled three boreholes as a pilot and after success of the project they added five more.

“We wanted to find out if the fish will survive in the salty water. To our amazement they did very well than in fresh water. They matured faster and that is what we want to research on,”John Safari Mumba, KMFRI chairman said.

Kitinda chairman Rudy Devinck, said they will not abandon the water and sanitation project because of the flourishing aquaculture venture.

Devinck said due to the salinity of the water, they decided to install a water pump at the Chakulo dam in Kavunzoni to pump water to a purification plant near the borehole for domestic use.

“We have constructed 60 toilets in homesteads across Goshi sublocation. We have also done piping from Chakulo dam to the water tanks at the borehole," Devinck said.

"We are appealing for more support to desilt and excavate the dam to accommodate more water. We are also in the process of pumping water from Kwa Dena dam and establish a purification plant at Mitsedzini village to reduce the walking distance to access water."

Mitangani area chief Stephen Thethe said the project will have lasting positive effects on the community.

He expressed optimism that the area will soon be an economic hub. He said residents had even cleared all trees to burn charcoal as a source of income.

“The economic activities of this area are farming and ranching. Both farming and livestock keeping need water which is very scarce here. For the last three years we have not had any harvests," Thethe said.

"This project now guarantees a steady flow of income. We will soon embark on a campaign to plant trees now that we have water. Our livestock will also have water even during the dry season."

Thethe said the community was trained by KEMFRI officials on fish feed formulation, which has drastically reduced the operational expenses and optimised profits.

The group now sells a kilogramme of Tilapia at Sh400.

“We expect to reap from this project by supplying Tilapia  in Ganze subcounty. We are also looking at expanding and initiating other sub units of the project,” Karisa said.

Asichi says she is glad she did not give up, as she is now one of the leading fish farmers in Kakamega county.
News
9 months ago