Community issues 13-point agenda to DP which include addressing the land question. 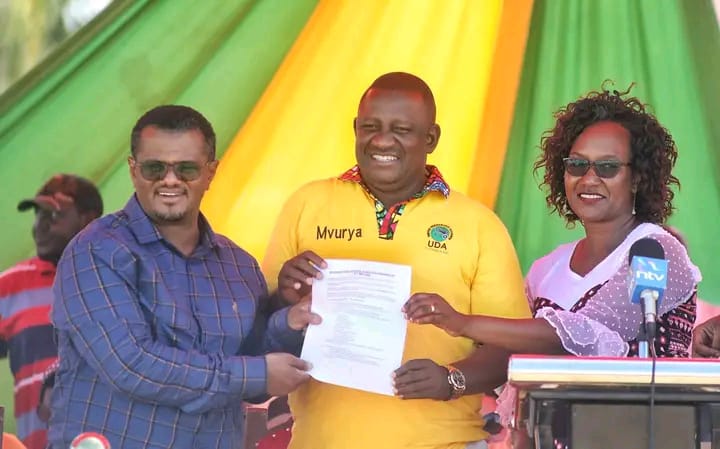 The scramble for Mijikenda votes in the Coast region has intensified with politicians from different divides lining up to win their support.

On Saturday, Kwale Governor Salim Mvurya, a principal in the Deputy President William Ruto’s Kenya Kwanza Alliance, led a brigade of UDA aspirants to woo the Mijikenda votes in Mombasa.

The community with a total of 237,855 registered voters, according to the Independent Electoral and Boundaries Commission 2017 register, is perceived to be the largest voting bloc in Mombasa.

Led by veteran politician Nyonga wa Makeba, the community presented a 13-point Coast declaration that they want addressed to support the DP in his quest to succeed President Uhuru Kenyatta at State House.

Top on their agenda is the land question, which they want addressed immediately.

They want prompt compensation of absentee landlords to free up land to the residents and also the repossession of illegally acquired public and community land.

The community also called for the return of port operations and cargo handling activities back to Mombasa within the first 100 days of Ruto in office, if he wins the August election.

Speaking during the Mijikenda declaration event held at the stalled Mombasa International University grounds in Majaoni, Shanzu, Mvurya said he will personally hand over the memorandum to Ruto.

“I have received the document and I assure you he (Ruto) is more than willing to address the issues affecting our region,” Mvurya said.

The outgoing Kwale governor said the Mijikenda community has been voting overwhelmingly, but have not benefited.

He said in the August polls, the community will not vote with emotions, but will vote with their interests.

“This time round we are voting to ensure that port services return to Mombasa and our people get title deeds for their lands,” Mvurya said.

“The person who will ensure that our interests are prioritised and worked on is none other than the Deputy President William Ruto.”

Mvurya drummed up support for the bottom-up economic model, saying that it was going to benefit the country by empowering the local mwananchi.

He took a swipe at the Azimio la Umoja One Kenya coalition, saying they had no proven track record of fighting for the common people.

“They have been in the ‘nusu mkate’ government and now in the handshake government. What have they done to address your plight?” he said.

He also called for six-piece voting for UDA aspirants in all positions across the country, saying this will be the only way to ensure the DP gets foot soldiers.

The foot soldiers needed will have to understand the economic model and implement it effectively.

“As Kenya Kwanza, we shall tap into the Blue Economy to turn around the region’s economy," he said.

“We have envisioned in our blueprint to establish the Shimoni Port and other small ports: one in Kilifi and another in Kipini (Tana River) to complement the new Lamu Port.”

Former Mombasa Senator Hassan Omar said the Mijikenda declaration signified the beginning of the journey to deliver the region from those who had hijacked its economy.

He faulted President Uhuru Kenyatta and the Jubilee administration for failing to address the region’s challenges.

“Those who took away our land are the ones leading this country today. They even took away port services from us to someone’s personal land in Naivasha," Omara said.

“The Kenya Kwanza alliance is the only coalition of leaders in the country which has the interest of solving the historical injustices meted on the region."

He said the time to re-awaken the spirit of the once powerful Cabinet minister and Kisauni MP Karisa Maitha had come, saying that during his time no one dared to mess with the region.

His sentiments were echoed by Selina Maitha, a sister to the fallen minister, who rallied the community to throw their weight behind Ruto.

Maitha two weeks ago decamped to UDA after ditching ODM.

Mombasa businessman Suleiman Shahbal had picked her as his running mate for the gubernatorial race before bolting out in favour of Mvita MP Abdulswamad Nassir.

She is expected to deputise Omar in the Mombasa gubernatorial race.

“Before accepting to join UDA, I had declined three attempts from the DP," Selina said.

"I have since then received threats from certain quarters who are afraid of me. I will not be scared in my quest to bring change to our people."

“Politics in this country is a game of numbers. Let us also this time round use our numbers to push for the Mijikenda agenda,” Mwashetani said.

DP now has the backing of Salim Mvurya (Kwale), Kilifi and some MPs in all the six Coast counties
Counties
6 months ago
Post a comment
WATCH: The latest videos from the Star
by ONYANGO OCHIENG
Coast
22 May 2022 - 22:00
Read The E-Paper