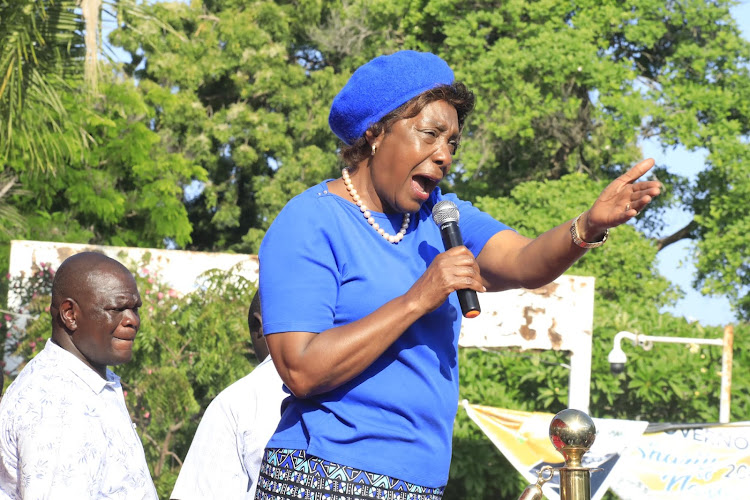 Wiper leaders now say the chaos at the Azimio rally on Saturday were planned by some leaders in Mombasa, who are opposed to Mike Sonko’s governor bid.

Rowdy youth tried to block the former Nairobi governor from accessing the venue of the Azimio rally at Mkomani.

Sonko was snaking his way into the ground through the crowd when youth became unruly and police were forced to shoot in the air.

But when the situation escalated with stones flying towards his vehicle, Sonko, who had used a different car to access the venue, was forced to retreat.

Wiper leaders led by Mombasa chairman Sheikh Omar Twaha and Nyali MP aspirant Millicent Odhiambo say there was an elaborate scheme to block Sonko from the dais and paint him in bad light.

They are now demanding that Sonko's security should be beefed up because his life is in danger.

However, ODM denied the claims, saying nothing was planned and it is the people who rejected Sonko.

“He has been insulting people since he came to Mombasa. He started his antics again on Saturday and people rejected him ,” Dee said on phone.

He said there were aspirants from different parties under Azimio, including Kanu, Wiper and Jubilee on the dais, but all was peaceful until Sonko arrived.

“Who is this who is so special? He is a candidate like any other he is not a sitting governor, MP or senator," Khamis said.

“If that was his style in Nairobi, Mombasa people are not used to such antique. They should stop looking for issues where there are no issues."

But the Wiper leaders said there was a signal that was sent from the dais that prompted the alleged hired goons, who were placed strategically to act.

“We saw a leader showing signs, crossing his hands and immediately all hell broke loose,” Odhiambo said on phone on Sunday.

She said they have information the chaos were planned by three ring leaders of a gang known as ‘Vichuzi’ at Mkomani.

“That thing was precisely planned. The boys who were planning it did it in Mkomani. Three boys. They were talking of pepper spray ,”  Odhiambo said.

She said someone must had been instructed to monitor the car that Sonko that is why the former governor tried to confuse them by using a car.

Twaha said Wambua was injured in the head, shoulder and hands after a huge stone hit him as he tried to protect Sonko.

“We rushed him to Aga Khan hospital but late in the night we transferred him to another hospital for security reasons,” Twaha said.

Azimio leaders called for the arrest of Sonko saying he disrupted the rally.

His entrance at about 3.30pm found former Kisauni MP Rashid Bedzimba on stage addressing the crowd.

“Who can drive a vehicle through a crowd like that? How? Unless you are a mad person, you cannot do that,” Ngilu said.

She said Sonko had shown disrespect towards ODM and Azimio leader Raila Odinga.

However, Sonko’s aides say the former governor had planned to make peace with the Mombasa brigade opposed to his bid.

“Sonko was in Eldoret for his court case which ended late on Friday. But he said he cannot miss the rally out of respect for Baba," the aide said.

He travelled to Mombasa on Saturday morning.

“He was to ask Baba for forgiveness for being late and not joining him in the Coast tour because of the court case that was sponsored by some of the leaders who were on the dais yesterday,” he said.

Governor Hassan Joho has several times said Mombasa is not a dump site where leaders who have been rejected elsewhere are thrown.

“Mombasa will not be bought,” he said.

Odhiambo corroborated the statement saying Sonko arrived in Mombasa at 10am.

“Sonko had planned to pass a message of peace to Baba that he means well and wants to work with the Mombasa team as one united Azimiocamp,” Odhiambon said.

She said Sonko can get votes for Raila, where Mvita MP Abdulswamad Nassir cannot.

Responding to Ngilu, Odhiambo said politicians access crowded grounds by car all over the country.

“The best way to access a crowded venue is by car for security reasons,” Odhiambo said.

Twaha said Wiper is in Azimio and its members had every right to attend the rally.

“We had announced that we will be attending the meeting. But our Mombasa colleagues had other plans,” the cleric said.

Nassir said Mombasa will not be divided on the basis of tribalism.

“I have gone round Mombasa and residents said they are ready to defend the county. They will not allow to be divided on religious and tribal basis,” Nassir said. 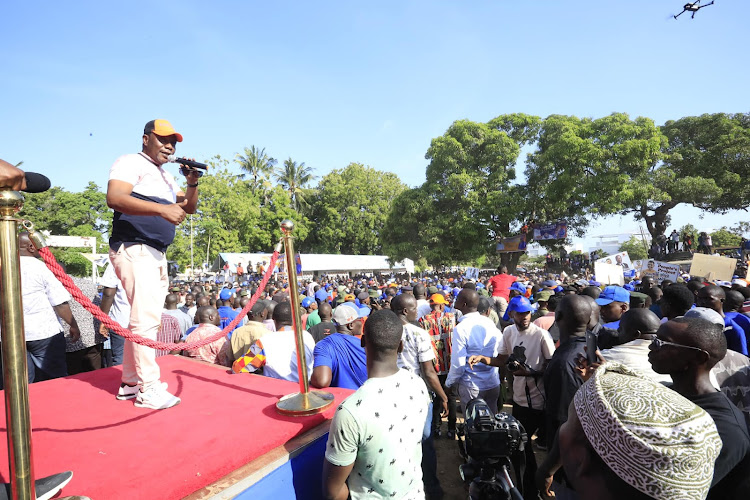 Sonko was forced to leave the event as police lobbed tear gas to disperse the crowd.
News
1 month ago

He says he will bring three water boozers per week in each of the six subcounties to deal with water problem.
Counties
1 month ago
“WATCH: The latest videos from the Star”
by BRIAN OTIENO Correspondent, Coast Region
Coast
15 May 2022 - 22:00