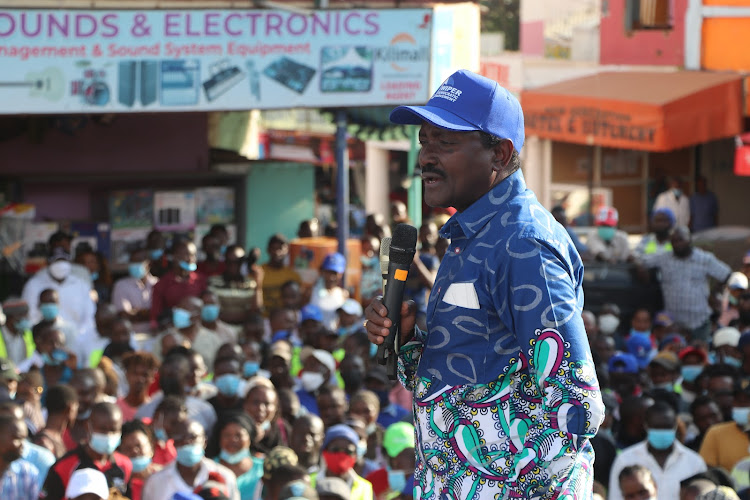 Wiper leader Kalonzo Musyoka has hit out at Taita Taveta Governor Granton Samboja accusing him of laxity and failure to complete the much–awaited banana processing plant in Taveta.

Kalonzo said the multi-million plant could have saved farmers from huge losses over exploitation by middlemen and lack of steady market.

Construction of the plant, Kalonzo said, was overdue, cutting short dreams of farmers who had increased banana production ahead of its operationalisation.

“Such plant should have been completed long ago but the county government is clearly not willing to do so. Leaders should learn to prioritise the needs of the electorate,” Kalonzo said during a political rally in Taveta on Friday.

The Sh110 million European Union funded plant was aimed at boosting the value addition chain of banana production and food security in the arid and semi-arid areas of the county.

Its construction has however stalled for the last two years over what the agriculture department said was lack of funds to operationalise it.

The much needed processing plant was set for completion by September, 2020.

Kalonzo who fell out with Samboja after the county boss ditched Wiper for ODM, said Taita Taveta had derailed for lack of seriousness in implementing development projects.

“Last election I came here and brought you a Wiper governor. He however left the party and joined ODM instead of concentrating on development,” Kalonzo said.

The assembly’s Agriculture, Livestock and Fisheries Committee vice chairperson Martha Kenio said construction at the plant and all collection centres had stalled without any communication.

Keino noted that farmers were recording losses yet a ready solution was available and only needed the department of Agriculture to hasten the construction.

The nominated MCA said many farmers had heavily invested in banana farming, banking on the processing plant.

The county is now the second leading banana producer countrywide, recording an increment in productivity of 10 percent, according to the Kenya Agricultural and Livestock Research Organisation.

Banana processing plant to be completed in two months.
Counties
2 years ago
“WATCH: The latest videos from the Star”
by SOLOMON MUINGI
Coast
15 May 2022 - 22:00