Boga hits back at Duale over professor 'propaganda' 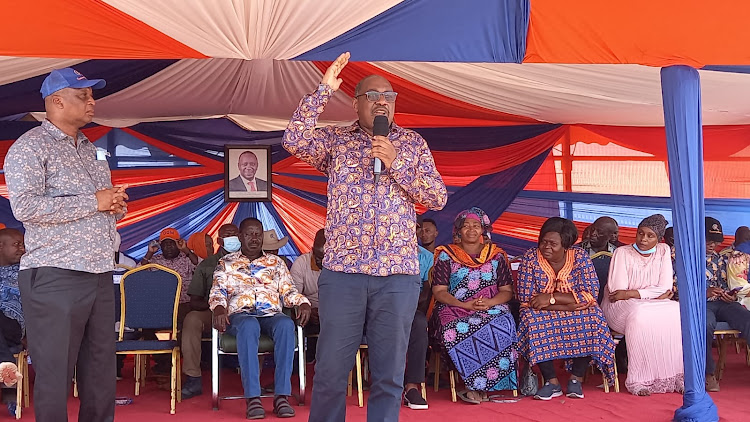 Boga quit his job as Agriculture Principal Secretary in February to join the race to succeed Kwale Governor Salim Mvurya.

Boga is running on the ODM ticket against UDA's Fatuma Achani, the current deputy governor.

Duale last week asked residents to vote for Achani, saying Boga had no development track record apart from his many certificates of being a professor.

"IEBC won't concentrate on who has the most certificates and so will the voters," Duale said.

Duale spoke at Maingidza in Msambweni constituency during the groundbreaking for the construction of Council of Imams and Preachers of Kenya offices.

Duale said majority of the professors in the Cabinet scored poorly during the vetting process.

On Friday, Boga dismissed Duale's words as baseless and misleading.

"Duale was here and said that Kwale people don't deserve to be led by professors. Kindly reject such nonsense because those are lies," he said on Friday during the Azimio rally in Msambweni.

Boga said his bid remains strong and focused on ensuring the lives of  Kwale people are improved through massive development and better jobs.

He said once elected, he will improve the bursary kitty and promote better education for all.

"There are individuals using the bursary to threaten residents. Let me assure you under my leadership the bursary programme will be enriched," he said.

He said children will be safe under Raila's government and Kwale residents should expect more goodies from them.

He said Kwale people deserve literate and resourceful leaders like Boga who have well-elaborated socioeconomic agendas.

"We will elect professors as our leaders, not illiterates," he said.

Ngao told Duale not to interfere with Kwale's politics and mind his own business.

Says he has the cure to the perennial land injustices.
News
1 month ago

The union is supposed to end political enmity and solidify the party at the grassroots level.
Counties
2 months ago
“WATCH: The latest videos from the Star”
by SHABAN OMAR
Coast
15 May 2022 - 22:00