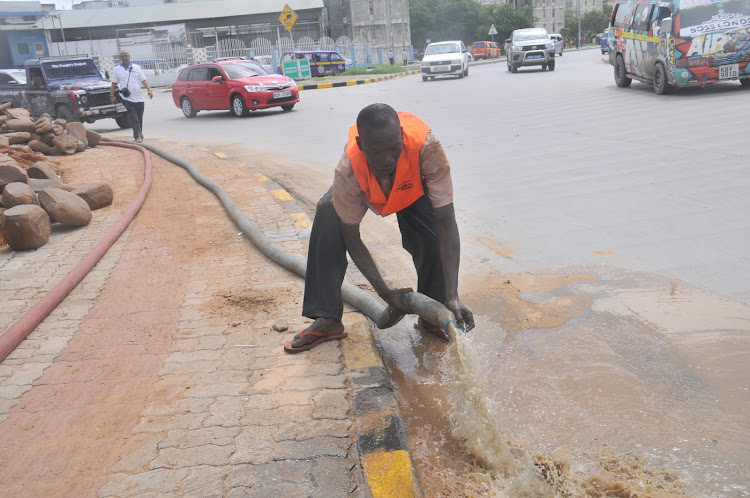 DRAINAGE SYSTEM Mombasa county employee controls the flow of storm water from a manhole that had been blocked at Makupa causeway.
Image: LABAN WALLOGA

The Mombasa government is cleaning and opening up clogged drainage and waterways across the county.

The county sanitation team has been on the ground, especially at Msikiti Hamisa, Central Police and Msalani in Old Town ward that were flooded during heavy rains experienced last week.

Public Works executive Taufiq Balala said the flooding witnessed during the rains was a result of clogged chambers and drainage systems.

“The blockage was caused by the first rains that collect dirt and wash it down the waterways that end up blocking the drainage system, causing water to overflow onto the roads,”Balala said.

Balala said paper bags and mineral water bottles combined with sand and dust form most of the dirt, causing the blockage in Mombasa.

“There was also blockage around the Makupa roundabout that was caused by the construction agencies doing the road that covered one of the inlets. We have however managed to resolve it,” he said.

He further said inflow capacity was more compared to outflow, which led to some of the areas and roads to flood during the rains.

Balala said illegal sewage connection is still an issue within the CBD, which is hindering the efforts to deal with the drainage issue.

He said sewerage was not part of his department, but in most cases ended shouldering the blame for sewer spillages, especially in Old Town.

He asked residents to be vigilant against illegal dumping, and to exercise responsible waste disposal as most chambers, especially along Mlango Wa Papa area, have been discovered to be clogged up by household solid waste.

In January, the county suspended all new construction permits in Majengo and Old Town within Mvita subcounty.

The indefinite suspension took effect immediately, pending inspection of all illegal sewerage connections and biodigester requirements for all new constructions.

“We are now insisting that any structure coming up must put up bio-digester building plans. The bio-digester is supposed to treat the sewage before safely releasing it into the drainage system,” he said.

“Until that settles down and we have everybody complying, then this is going to be a problem of the past.”

This suspension was done following public outcry over row sewage covering roads and streets around Ziwani.

Balala said the ban was still on, but the challenge was on the already existing houses which had received approval.

The notice was issued by the Housing executive Balala following a public outcry.
Counties
4 months ago

The water coverage in Kisumu is below 50 per cent and sewerage eight per cent
Siasa
4 months ago
“WATCH: The latest videos from the Star”
by ONYANGO OCHIENG
Coast
11 May 2022 - 22:00