We will curse you if Chitembwe gets fired, Kaya elders warn Sonko

Chitembwe is accused of allegedly receiving bribes to defeat justice 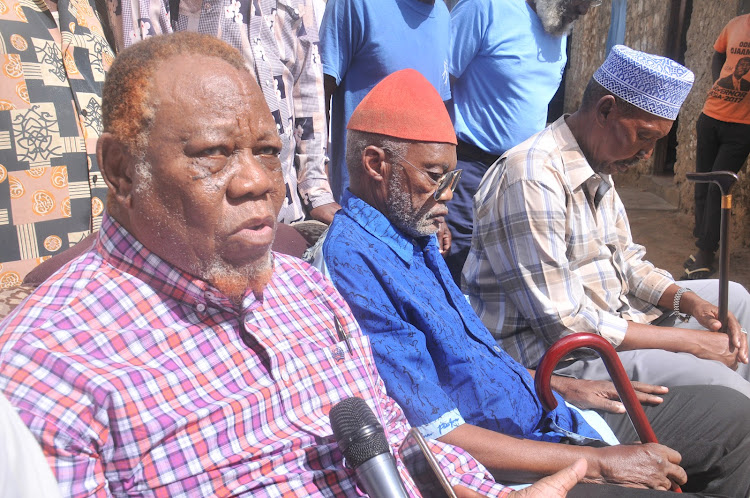 A section of Kaya elders has come to the defence of High Court Judge Justice Said Juma Chitembwe, who is on the verge of dismissal.

Last Wednesday, the Judicial Service Commission recommended the formation of a tribunal to investigate Chitembwe over gross misconduct.

President Uhuru Kenyatta has  from Wednesday 14 days to suspend the judge and form a tribunal to investigate him over the allegations leveled against him.

The tribunal will recommend whether Chitembwe should be sacked or not.

However, in Mombasa, Kaya elders have turned the heat on former Nairobi governor Mike Sonko, accusing him of being behind Chitembwe’s woes.

Led by Fuzi Hamisi Mwarandu, the elders faulted Sonko for the “removal of the only Digo and Mijikenda judge sitting at the High Court.”

The elders threatened to curse Sonko, if Chitembwe gets fired, saying the judge was among the few individuals from the Digo community holding high positions in the country.

“The number of Digo and the entire Mijikenda community holding high positions in this country is very low, why then go after Chitembwe?

“We as elders are not happy with this. We won’t take it easy and in case that he is fired, we shall go to our shrines and curse you Sonko,” Mwarandu said.

Mwinyi Khamisi faulted Sonko for recording the judge and releasing the recordings on social media, which led to JSC’s recent recommendation.

“We all saw what you did and posted on your social media accounts. Be warned, if our judge gets fired, a curse from the Ngambi elders awaits you,” he said.

His sentiments were echoed by Seif Manuwari, who accused Sonko of being used to take away the post from the Mijikenda community.

Manuwari said Chitembwe’s dismissal will be a big blow to the Digo and the entire Mijikenda community.

JSC chair Chief Justice Martha Koome on Wednesday sent a report of a panel constituted by the commission to investigate Chitembwe, to Uhuru for further action.

In the report, Koome said the commission was satisfied that the petitions disclosed grounds for the removal of Chitembwe.

“Accordingly, the commission resolved to send the petition to the President for further action in accordance with the provisions of Article 168(1) of the constitution,” the Chief Justice said.

There were four petitions filed seeking the removal of Chitembwe but two were pulled out.

John Wangai and Stephen Ooko last year withdrew their petitions, saying they had no complaints against the judge.

Wambua in his petition alleged that Chitembwe’s brother, Amana Jirani, received a bribe on his behalf to render a favourable ruling in a petition seeking the impeachment of Sonko as Nairobi governor.

His allegations were based on recorded telephone conversations between the judge, his brother, Sonko and other parties involved.

Wambua said Chitembwe abused his discretion and rendered dishonest judgments based on outside pressure and influences.

The judge is no stranger to controversy as he was last year summoned by the Directorate of Criminal Investigation.

The judge is also entangled with 49 others in a land grab case of prime land belonging to the Nyali Primary School Mombasa.

He had also been prosecuted over allegations of embezzlement of funds at the National Social Security Fund when he was the company secretary. He was acquitted in the matter.

Judges who have faced tribunal

Those who survived include former Supreme Court judge Jackton Ojwang.
News
1 week ago

The judge is accused of misconduct and scheming to compromise a case.
News
2 weeks ago

The Commission has written to President Uhuru Kenyatta for further action.
News
2 weeks ago
“WATCH: The latest videos from the Star”
by ONYANGO OCHIENG
Coast
09 May 2022 - 22:00