SaysKarua has been tried, tested and has the experience

• “Picking Karua will give women the morale and confidence that the coalition values the contribution of women in this country. Karua is presidential material,” Viola said.

• Mayieka said they have no issue with Chege, but she is still very young and has time to gain experience before venturing into national politics. 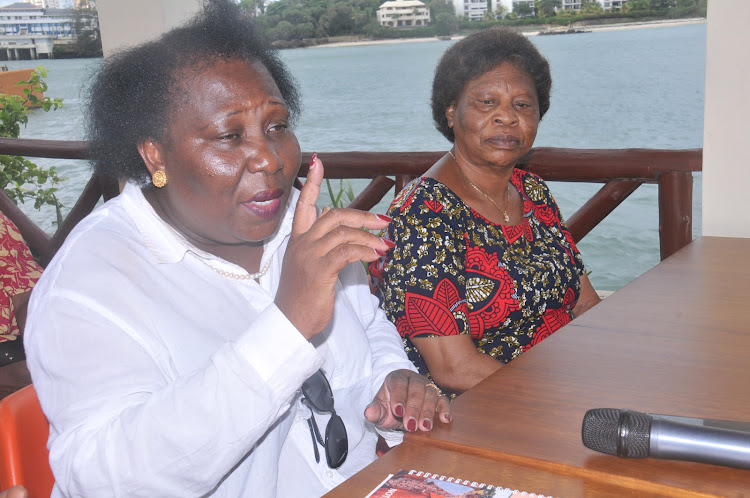 RUNNING MATE: Maendeleo Ya Wanawake chairperson Rahab Mulu during a press conference in Mombasa on Friday, May 6.
Image: LABAN WALLOGA

The lobby said Karua is the best fit.

MYWO national treasurer Agnes Viola said Karua has been tried, tested and has the experience.

“Picking Karua will give women the morale and confidence that the coalition values the contribution of women in this country. Karua is presidential material,” she said.

The leaders spoke in Mombasa on Friday evening, after a meeting to plan for the MYWO 70th anniversary, to be held later this month.

Viola said they will rally women across the country to throw their weight behind the Azimio-One Kenya coalition.

“We need to put our house in order, which begins with naming the presidential running mate. As Coast women, we want the position given to Karua,” she said.

MYWO national organising secretary Elizabeth Mayieka said they have no issue with Chege, but she is still very young and has time to gain experience before venturing into national politics.

“Karua is a veteran in national politics compared to Chege who is still young. As Kenyan women, we see that she (Karua) is the right person for the DP job.

“We are also looking at someone who can add something to the vote basket, which is why we support Karua,” she said.

She said women are more disadvantaged compared to their male counterparts.

She said this is proof that the one-third gender rule is still a problem in Kenya.

“We are happy that we have a number of women who were issued with certificates during the just concluded primaries.

"However, we still call for parties to nominate more women both in the National Assembly, Senate and county assemblies,” Mulu said.

The chairperson futher said that women who will be lucky to get elected in August should uphold their integrity and serve as role models.

“The question we are asking is what happens to the wisdom that comes with age? The fact is older women have more experience,” she said.

Mulu said Coast is the fifth region she had visited, where women are calling for Karua to be Raila’s number two.

“I have not implied at anything, the women have spoken. Mine is just to tell President Uhuru Kenyatta, you have heard what the women are saying,” she said.

The chairperson said while campaigning for Jubilee in 2017, many women wanted first lady Margaret Kenyatta to succeed him in 2022.

“It is serious business that women have decided and expressed their views. As I head to Nyanza next week, I will also listen to what they are saying,” she said.

Kalonzo has deputised Raila twice in 2013 and 2017, in which they both lost to Uhuru and Deputy President William Ruto.

Panel now says meeting would only be available for those wishing to give a presentation before the team.
News
2 weeks ago

The Azimio presidential aspirant recently formed a committee to advise him on who is best suited to deputise him.
Counties
2 weeks ago

The Wiper boss is at the crossroads on whether to submit to the seven-member panel or not.
News
2 weeks ago
“WATCH: The latest videos from the Star”
by ONYANGO OCHIENG
Coast
09 May 2022 - 22:00