The rising cost of living has hurt Eid ul-Fitr celebrations.

• Mwamburi said many Muslims were unable to buy food for Eid-ul-Fitr celebrations due to the high cost of living.

• Hussein, asked the government to look into ways of helping low-income earners access food items at a lower price. 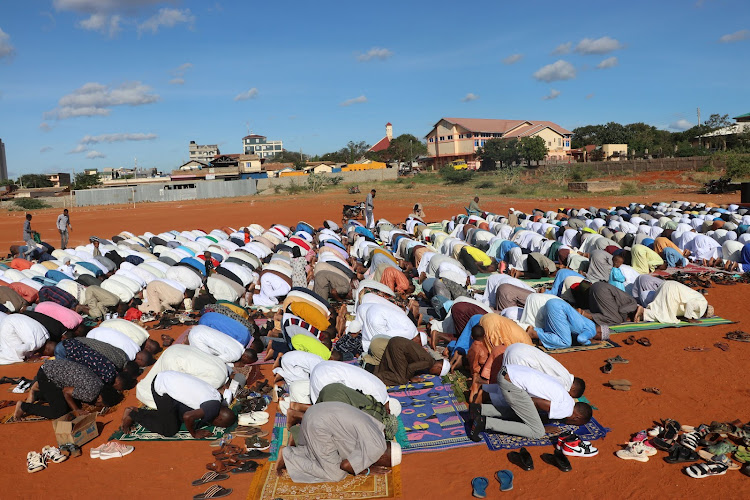 Muslims during Eid Ul-Fitr prayers at Moi Stadium in Voi on May 2, 2022
Image: SOLOMON MUINGI

Muslim leaders and faithful have appealed to the government to lower the cost of basic commodities.

Dr Adam Mwamburi, a cleric, said on Monday that many Muslims were unable to buy food for Eid-ul-Fitr celebrations due to the high cost of living.

“The prices of most commodities used during the holy month of Ramadhan and Eid-ul-Fitr celebrations have gone up. This has highly affected the celebrations,” he said.

He said the current high prices are a threat to hundreds of Kenyans facing hunger.

“We're asking the government to think about poor Kenyans for once. Hundreds of people are facing hunger,” Hussein said.

Mwamburi also urged politicians to preach peace ahead of the August 9 polls.

He appealed to Kenyans not to be swayed to bribes and tokens and instead elect leaders of high integrity, who will improve the county’s economy.

“Politicians have a bigger role in ensuring peace prevails during and after the electioneering period. Similarly, Kenyans should exercise their rights in electing good leaders,” Mwamburi said.

Faithfuls started streaming into the prayer grounds and mosques as early as 7 am.
Counties
1 month ago
“WATCH: The latest videos from the Star”
by SOLOMON MUINGI
Coast
03 May 2022 - 22:00