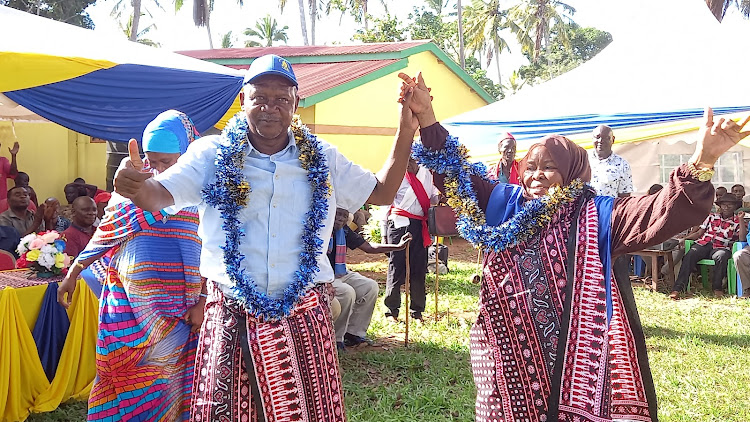 Kwale governor aspirants have shifted their focus on the county bursary kitty programme in a bid to succeed the incumbent Salim Mvurya.

The bursary programme dubbed elimu ni sasa was initiated in 2016 by Mvurya to help needy students.

Mvurya has endorsed Achani to take over from him.

The bursary programme was established by the county assembly, where MCAs authorised it through a bill.

The county pumps in Sh400 million annually to facilitate the programme.

The funds is distributed equally among the 20 wards with each getting Sh20 million.

The programme has now become an important campaigning tool for aspirants who want to succeed Mvurya.

While revealing his running mate last week at Golini in Matuga,  Chai said he will improve the bursary programme.

"I will put in more funding in the bursary so that each ward gets Sh30 million instead of Sh20 million," he said.

Chai said his administration will ensure even the students who attain less than 350 marks in KCPE will benefit from the bursary.

Under Mvurya's administration, primary school students had to garner at least 350 marks and above in KCPE exam to qualify for the bursary.

He said he will push for more technical colleges to help create self-employment opportunities for the youths.

Chai said he will also ensure the colleges are well furnished with equipment and personnel to offer best technical courses.

County assembly speaker Sammy Ruwa said he wants to increase the money for the bursary programme to Sh800 million per year.

He said each ward will get Sh40 million. Ruwa said the number of students has increased hence the need to raise the bursary fund.

Speaking at Forest Whispers Hotel in Ukunda in February, Boga said he wants to enrich the programme.

"In 2013 students were few but the number has increased. That's why as a governor I will try to formulate better approaches to make it effective and reliable," he said.

The programme is also one of the key agendas for the former transport minister Chirau Ali Mwakwere.

Mwakwere wants to promote education through sponsorship and bursary programmes.

He said if elected governor more children will benefit from the  programme and scholarships regardless of the marks they score.

Achani maintains that she is the only person who can improve with the bursary programme effectively.

She said having acquired enough leadership skills from Mvurya, she knows the programme and how to make it better.

The programme has seen thousands of students benefit and access university education.

Before devolution many learners were unable to access opportunities because of poverty.

While for some their dreams swept away by teenage pregnancy and early marriages.

Say first 100 days would be administration transformational and another six months for economic changes
Counties
3 months ago
“WATCH: The latest videos from the Star”
by SHABAN OMAR
Coast
02 May 2022 - 22:00