Divisions in ODM as aspirants cry foul over nominations 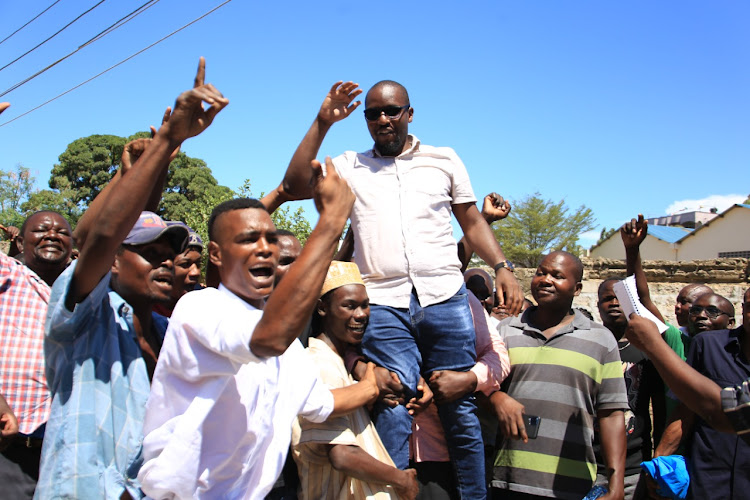 Cracks have emerged within the ODM in Mombasa county after the party decided to issue direct tickets to selected MP aspirants.

In Nyali, ODM is said to have issued a direct ticket to Said Abdalla alias Saido, who is Governor Hassan Joho’s relative.

Lawyer Joshua Ndere, who was Saido’s main challenger, has threatened to quit and run as an independent.

The same challenge is being experienced in Likoni, Changamwe, Kisauni, and Jomvu.

On Wednesday, Ndere alleged favouritism in the party.

Ndere, who was one of the aspirants called by the ODM in Nairobi last month, to agree on a consensus, said they left the meeting without a conclusion.

He said two weeks since they met in Nairobi and they are yet to receive any communication from the ODM National Election Board.

“Let the party make it clear. We heard that our opponent is bragging that he already has the certificate. I’m ready to resign from the party and run as an independent,” Ndere said.

He said the party made it clear that it had no intention of conducting nominations for MP, senate, woman rep and the governor seats in Mombasa

“We are almost on the final stretch. Our supporters need direction. They want to know if we are going for nominations or the certificate has already been issued to someone,” Ndere said.

“If the party has its preferred aspirant, then let it not waste our time and resources, we can seek other alternatives and meet on the ballot box."

He said ODM has been making mistakes during nominations by issuing certificates to hopefuls who end up disappointing the party.

In 2013, the party lost the Nyali parliamentary seat to Hezron Awiti of Wiper.

Awiti, who ran against John Mcharo in the ODM nominations, decamped to Wiper after claiming that he was rigged out in the nomination.

In 2017, incumbent MP Mohammed Ali opted to run as an independent candidate after losing to Abdalla in the nominations.

Ndere called on the party to allow the people to nominate the leaders they want.

He also took a swipe at the recently concluded primaries for MCA aspirants which he said were marred with violence, voter importation and multiple voting.

He said that it was difficult to understand the criteria the party used to issue certificates to aspirants defeated in the nominations.

“We have keenly observed what happened with the MCA aspirants, some won but were denied their certificates. The entire process was not free and fair,” he said.

Moses Aran, ODM youth league leader in Mombasa ditched the party on Wednesday to run as an independent.

Aran was a nominated MCA but lost in the nominations to the current Tudor MCA Tobias Samba.

“After consultation with the people of Tudor, we have decided to proceed to the ballot because they have shown great faith in my leadership,” he said.

He termed the ODM nominations a “sham process that circumvented the people’s will.”

“The people of Tudor want change, they feel betrayed and want  transparent and credible polls, however we march on,” he said.

ODM opted to carry out nominations for MCA aspirants only in Mombasa and Kilifi Counties.
News
9 months ago