Sickly boy was in and out of hospital most of the time, became Coast's KCPE superhero.

Busy Bee Academy celebrates their best candidate Joshua Safari Ziro who scored 421 marks in his KCPE exams. Joshua is the top student in Mombasa and the coastal region. 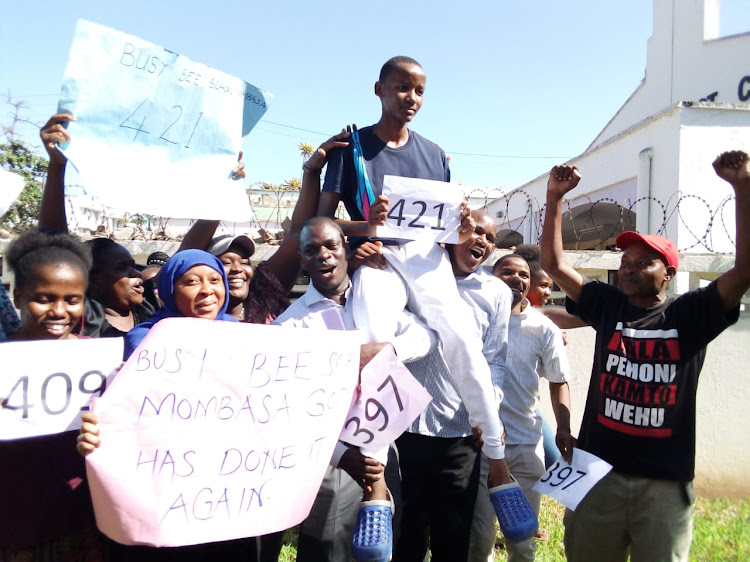 Joshua Safari Ziro could not suckle his mother’s milk because was allergic to milk, protein and fats.

His mother, Loraine Mulamba, said among her three sons, Joshua was the most hospitalised

On Monday, the 14-year-old boy emerged the top Coast student in the just released KCPE examination with an impressive 421 score.

He was schooling at Busy Bee School in Tudor, Mombasa, which is among the best performing schools at the Coast.

“Joshua has been my fighter, I sometimes call him my miracle baby. Imagine giving birth to a child who is allergic to your milk and lots of food,” his mother said.

“He could not suckle, he could not take milk, proteins or fats. Amongst my kids, he is the one who has been hospitalised the most.”

Speaking at the school after receiving the results, Mulamba said she always assured her son that he was destined for greatness.

Mulamba said her son’s success made her feel she got the value for the money they have invested in school fees.

“Sometimes you pay a lot of money, you work hard and buy the books and wonder if you will ever get value for money. Today, I got the value for my money,” she said.

Before the results were announced on Monday afternoon by Education Cabinet Secretary George Magoha, Joshua was so tense  he could not  eat his lunch.

“It feels good to be named the best. I did not expect it and I was so worried,” he said.

With 421 marks out of the possible 500, Joshua wants to join Alliance Boys High School and pursue medicine at  university.

“Right now, I feel so relieved and grateful to God and I’m extremely happy. I want to pursue medicine to become a doctor,” he said.

The first born in a family of three said his teachers and parents contributed to his success.

“I want to thank all those who have contributed to my success, my teachers, my fellow students and my parents,” he said.

Kiswahili, he said, was his biggest challenge.

“We have managed a mean score of 381 and our best student had 421 marks. while the lowest had 330 marks. We thank God they have all done well,” she said.

She said this is a third consecutive year they have producedthe top candidate at the Coast.

“We had prepared to perform well because the students were disciplined and had prepared well for this examination,” she said.

KCPE results to be released this week

This comes even as marking of KCSE exams begins across the country.
News
4 months ago

Magata Bruce from Gilgil Hills Academy was the top candidate in 2021 KCPE exam.
News
4 months ago