•Approximately 12,000 people will be displaced by the project which requires over 250,000 acres of land.

•The project is funded by the World Bank through the Kenya Water Security Programme. 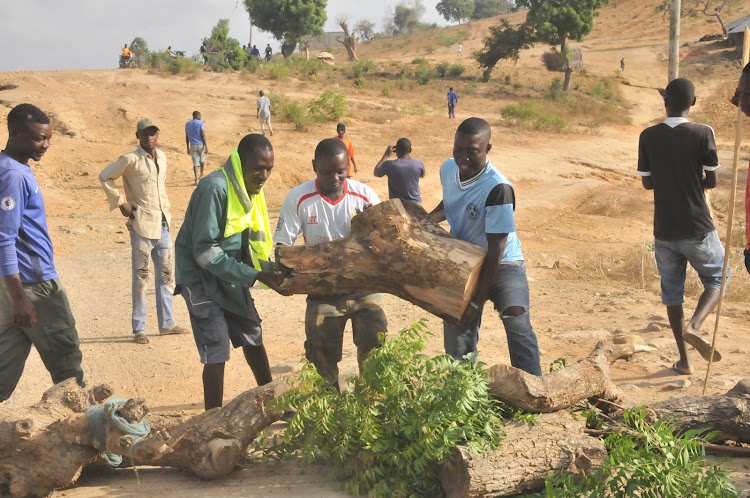 Fulugani residents in Kwale have vowed to stop construction works at the Mwache multipurpose dam project.

They are demanding a share of job opportunities at the site.

On Tuesday, they barricaded the road leading to the entrance of the Sh20 billion project.

The construction of the dam whose contract was signed in 2018 was to start on February 15.

It will take seven years to be completed.

The contractor, Syno Hydro, a Chinese state-owned hydropower engineering and construction company, was waiting for the national government to finalise the land compensation exercise.

Residents said the compensation package of between Sh250,000 and Sh300,000 per acre was too little.

Approximately 12,000 people will be displaced by the project which requires over 250,000 acres of land.

The project is funded by the World Bank through the Kenya Water Security Programme.

During a stakeholders meeting last week, the residents said they were to be prioritised in employment.

The meeting brought together the local, county administration, Coast Water Board and the residents.

A committee was set up to represent the residents of Fulugani, Mwashanga, Mwache and Nunguni among others to discuss the distribution of the job opportunities available.

However, the residents said they did not receive any further communication.

Two weeks ago, excavators and other equipment were brought to the site.

“No work will go on until we are involved, a bigger percentage of the project is in Fulugani,” Mwambire Haranga said.

He said they are not against the project, but want their fair share of the job opportunities as promised.

“We will not allow outsiders here. We have local people with good education background and skills needed to execute the work,” he said

Njala Nyiro questioned why the interviews for drivers and machine operators were conducted in Kilifi yet the project was in Kwale.

She said the five years experience requirement was going to lock them out.

Hamisi Ndego said the long wait made them lose hope in the project.

“We are not going to allow people from outside to work here, while we are unemployed, give us what you promised,”  Ndego said.

He blamed political leaders for failing to intervene and address the matter.

“The fruits of the project must include job opportunities. We have the skills needed,” he said.

He said residents will be allowed to work at the site.

Once completed, the flagship project under Vision 2030 is expected to eradicate water shortage in Kwale, Mombasa and Kilifi.

About 2,600 acres of land will also be put under irrigation.

The national water coverage has increased by 20 percent for the last nine years.
News
9 months ago

Makamini dam affected residents decry that the payment is taking longer than expected.
Counties
11 months ago

They claim the contractor is outsourcing workers from other counties to do casual jobs.
Counties
11 months ago