•Nassir had a series of events in Kisauni, Nyali and Jomvu constituency over the weekend.

•Shahbal held a meeting with Luo community in Mombasa before holding a series of rallies in Kisauni and Nyali constituencies. 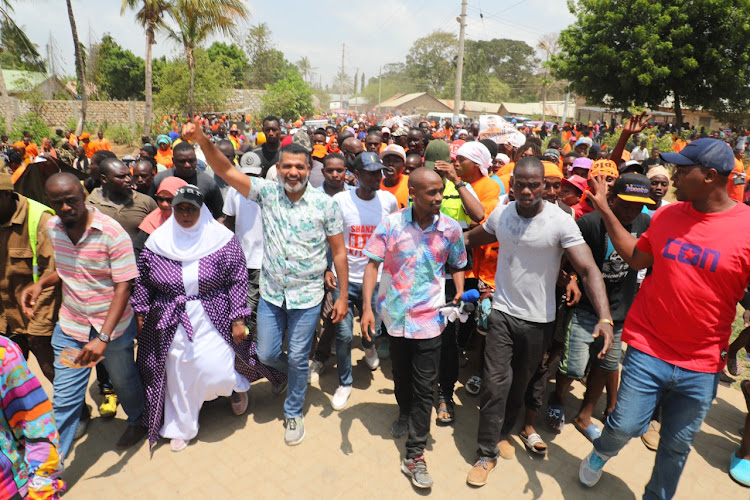 BATTLE FOR MOMBASA: Mvita MP Abdulswamad Nassir during a rally in Shanzu in Kisauni constituency on Saturday
Image: LABAN WALLOGA 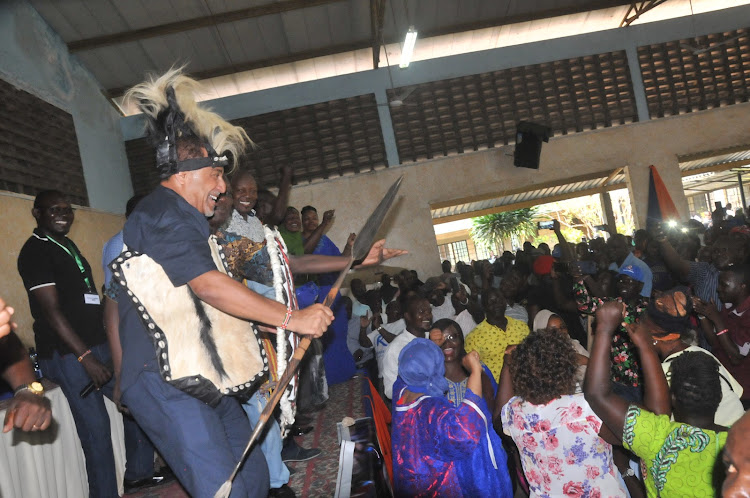 BATTLE FOR MOMBASA Mombasa businessman Suleiman Shahbal during a meeting with the Luo Community on Friday.
Image: LABAN WALLOGA

Four top contestants in the Mombasa governor race over the weekend intensified their campaigns in the six subcounties.

They held a series of political activities in their quest to succeed Hassan Joho during the August 9 general election.

On Friday, Shahbal received endorsement by a section of the Luo community living in the county led by the Luo Nation executive director Owino Nyady.

He promised to unite all the communities living in the coastal county and revive the region’s economy.

“Hope is a precious commodity that is missing today in Mombasa, but we will restore it,"Shahbal said.

"I don’t take what you have bestowed on me for granted, I owe you people and I promise to deliver all that I have pledged.”

On Saturday, he took his campaign to Nyali constituency where he traversed the five wards of Kadzandani, Ziwa la Ng’ombe, Mkomani, Kongowea and Freetown selling his ‘Change must come’ ideology.

Nassir on the other hand  took his campaign to Shanzu in the larger Kisauni constituency.

The Mvita MP took to the streets of Shanzu, in the company of a number of MCA’s, for a road show to popularise his candidature.

He promised to replicate his achievements in Mvita constituency in the entire county once he captures power.

“My message to everyone is that we spread the gospel of peace and embrace each other in love and unity,” Nassir said.

Later in the day, Nassir met with Freetown residents in Nyali.

He also held meetings with youths in Miritini and engaged village elders and Nyumba Kumi ambassadors from Jomvu.

“We listened to their pleas and came up with resolutions to improve their working conditions, to improve the lives of our local residents. Our manifesto shall be the peoples manifesto,” he said.

On Sunday, Nassir joined the congregation for a Sunday service at the Ushindi Baptist Church Mshomoroni in Mjambere ward also in Kisauni.

He later had an engagement with the Kisauni and Nyali Matatu Operators Association.

Former Senator Hassan Omar took his campaigns to Caltex grounds in Likoni on Sunday where he sold their ‘Bottom Up’ economic model.

Earlier on, accompanied by other UDA aspirants, they had an engagement with Junda residents in Kisauni.

“Delivering the economic revolution is inevitable.We must torpedo the dominance of a few over many,” Omar said.

Kisauni MP Ali Mbogo was at the Christian Fellowship Church in Junda for a thanksgiving service before joining faithfuls of the Soul Harvest Church at Bombo in Bamburi ward.

Later, he also pitched camp in Likoni where he engaged over 1,000 women from Bofu Ward.

“Women serve as a powerful catalyst for change.Their entrepreneurial spirit is an incredible resource that should be tapped, developed and leveraged for overall benefit and advancement of societies,” Mbogo said.

On Saturday, while campaigning for the deputy governor, Kingi’s wife Ruth Kache  took their ‘Maendelo Mashinani’ campaign to residents of Mwakirunge dumpsite in Kisauni.

She promised to turn the solid waste generated into an opportunity for growth through partnerships with the private sector and donors.

An opinion poll released on Sunday showed that Nassir was ahead in the race to be the county's chief with 48 per cent.

Shahbal came in second at 18 per cent with Omar coming in third at 5 per cent, according to the Infortrak Research and Consulting poll.

The research was commissioned by a human rights organisation, Haki Afrika and was conducted between March 19 and 22.