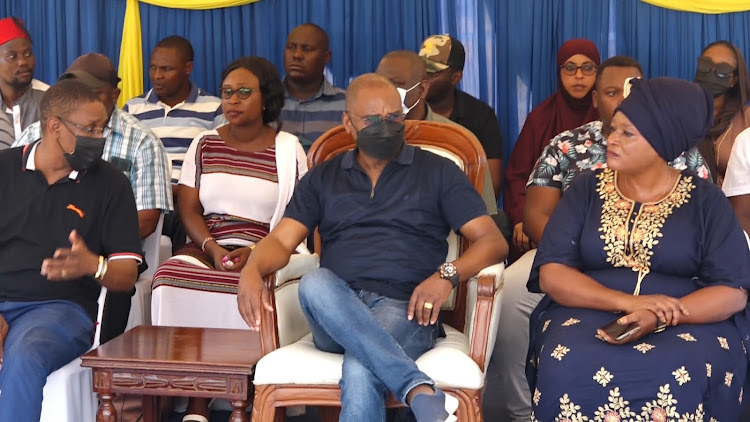 The Pamoja African Alliance party which is associated with Kilfi Governor Amason Kingi is gaining popularity as aspirants and defectors from other party keep joining.

Kingi used his 21-day tour of the county to popularise the party and strengthen his base to ensure they deliver more seats in the August 9, polls.

The PAA leader has been moving around with MCAs, Nominated Senator Christine Zawadi and former Malindi MP Wily Mtengo.

Kingi has been receiving defectors from ODM, UDA, KADU Asili, Kanu and ANC.

During a meeting  in Kakoneni, Malindi, PAA received Kenneth Karisa, who is eyeing the Malindi MP seat and Gerald Thoya who decamped from KADU Asili.

Speaking in the local Giriama language, Kingi said elders will help to decide who is the best candidate to fly the PAA flag in different political position.

However, as PAA prepares for the nominations, a war of words has ensued between Mtengo and Karisa.

Mtengo  said Karisa is welcomed but he must respect those who have invested in the party since its formation.

“I am in PAA to stay and I won’t quit, the brothers joining I welcome you, but when you borrow a lift in a vehicle you climb on back  not in front,” he said.

Karisa said he has decided to ditch ODM and join PAA to work with Kingi, who he says has shown the coastal people political direction.

“You came up with PAA which is a good idea and I have joined you despite knowing that the battle with my brother Mtengo will be fierce,” he said.

Amani Mkare, an aspirant for Kilifi North MP said many parties from outside came to ask for support from the coastal people.

However, leaders elected in those parties had no say in Parliament which really affected their people's development.

“We were in the party which failed to defend but now we have our own so let us sit on the same table with the others and plan together for us to benefit,” he said.

Kithi: PAA to push for return of port services to Mombasa

He is battling at least six other aspirants for Kilifi county’s top seat.
Counties
5 months ago

Kilifi's Kingi vows to vie for president in 2027

He assured members the agreement is part of a wider scheme to market the party on the national platform
Counties
5 months ago
“WATCH: The latest videos from the Star”
by ALPHONCE GARI Correspondent, Coast Region
Coast
16 March 2022 - 22:00