Kalonzo complains of frustration by Raila team in Coast rallies 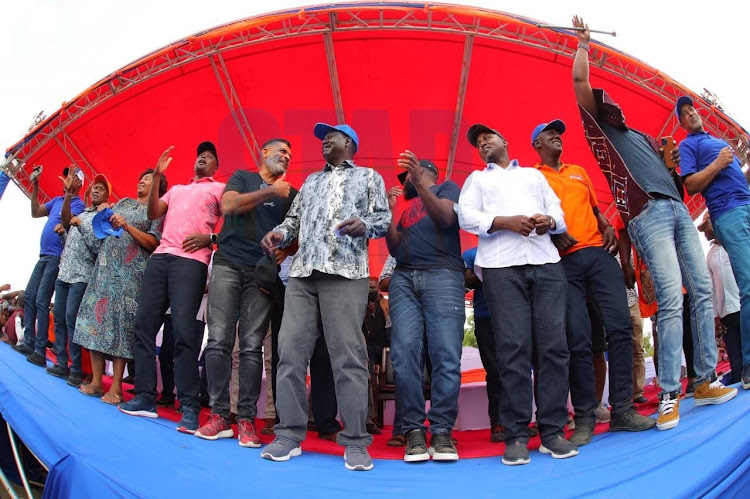 The One Kenya Alliance led by Wiper Leader Kalonzo Musyoka has complained that they were blocked from hold their rally at Tononoka and Makadara grounds in Mombasa.

Kalonzo’s brigade was forced to converge at the little known Manyarata grounds at Mishomoroni in the outskirts of Mombasa.

"They tried to frustrate our meeting by denying us entry to Tononoka and Makadara grounds, but we are here today and you people have come out in large numbers," Kalonzo said.

"On Monday we head to Kwale and we shall traverse the entire region and country."

Kalonzo took a swipe at Governor Hassan Joho over the garbage problem in Mombasa, saying Mombasa is the economic hub for the region and should be kept clean.

"I almost shed tears as I was making my way here. You want to tell me that you have a governor here yet Kadongo is the headquarters of garbage?" he said.

Despite last minute preparations, the Oka principals managed to pull a crowd at their rally.

Thousands of supporters thronged the grounds as early as 10am ready to welcome the Oka team.

According to a poll carried by Tifa between February 3 and 9, Ruto leads Raila in the State House race at 38 per cent to 27 per cent.

The poll also registers that Ruto's UDA  party is the most popular at 35 per cent followed by Raila's ODM at 24 per cent.

According to Radio Africa’s monthly surveys released on February 17, Ruto is leading with 47.1 per cent followed by ODM party leader Raila Odinga at 35.1 per cent.

Kalonzo came a distant third at 1.5 per cent ahead of ANC leader Musalia Mudavadi (1.1 per cent).

"They have been driving the agenda that it is going to be a two-horse race through their sponsored opinion polls, imagine a whole Kalonzo having only one per cent," he said.

“We will not accept those who are bribed at boardrooms to come up with cooked figures, we are going to show them dust."

On Monday, both the Azimio and Oka teams headed to Kwale for parallel rallies and roadside stopovers in a bid to lure supporters to their camps.

The Raila-led team addressed rallies in Mwangulu, Lunga Lunga constituency, and thereafter headed to Kinango before ending the day with stop at Kombani and Maasai stage.

Raila continues his coastal in Taita Taveta, Tuesday, while Oka team will be jetting back to Nairobi to attend Cyrus Jirongo's United Democratic Party National Delegates Conference at the Bomas of Kenya.

Deal to be inked on Saturday at joint ODM, Jubilee NDC.
News
11 months ago