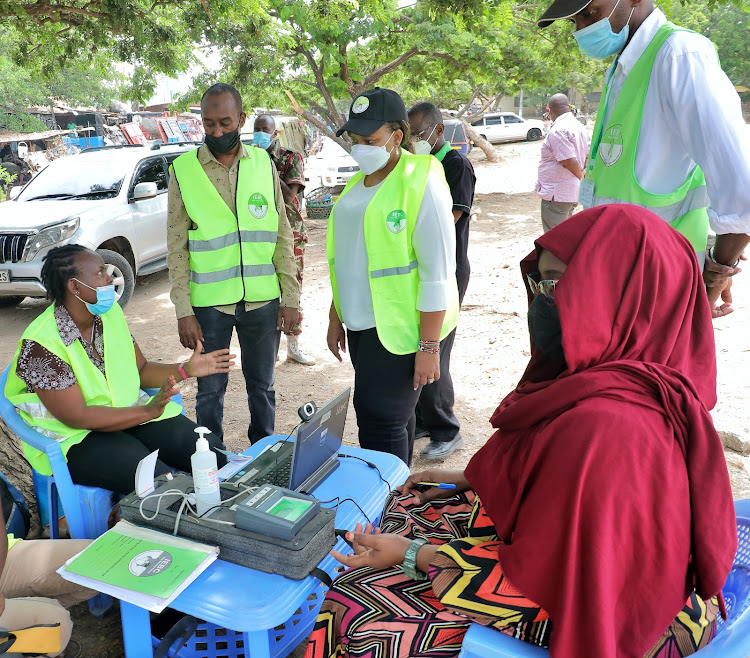 IEBC vice chairperson Juliana Cherera has expressed optimism that they may hit the target in the ongoing enhanced voter registration exercise at the Coast.

Speaking at the Kilifi county commissioner’s office on Monday, Cherera said they have brought on board more stakeholders to make it a success.

The vice chairperson is at the Coast to assess the ongoing voter registration and has urged residents to come out in large numbers and register.

She said the commission has partnered with political leaders, civil society organisations and the national government administration officers to address voter apathy.

“If we compare with the first phase, we are on a good trajectory and we are upbeat that we may hit the target. We have tried to improve on the issues that made us not hit our target during phase one of the  registration. We have kits in all universities. Pwani University is one of them and I’m glad to say the numbers that are trickling in is an improvement,” she said.

In the first phase, the commission listed 1.2 new voters out of a target of 6 million.

In the first week of the second phase, Coast counties registered 24,920 new voters against a weekly target of 128,259.

Kilifi county recorded the highest number of new registrations at 8,654. Mombasa came in second at 7,833 followed by Kwale county which recorded 3,380 new voters.

Kilifi county commissioner Kutswa Olaka said they have embarked on a rapid results initiative to issue all Kenyans who have attained the age of 18 years with a national identity cards so that they can be listed as voters.

“We have come up with an RRI and the registrar of persons has assured us that there will be no delay in the issuance of identity cards. Chiefs and their assistance are taking this exercise seriously and they collect identity cards from the registrar and issue them at the sublocation level.

Olaka said they have engaged political leaders in addressing the voter apathy challenge.

“We are in talks with the leaders and they are talking to the electorates. We also urge the public to make sure they register as voters so that they can elect their preferred leaders. If they don’t vote then they should not complain about poor leadership,” he said.

The county commissioner said security personnel are alert to make sure there will be no security issues during the electioneering year.

“We have learned from previous elections that it is during such times that various militia groups emerge. I want to assure everyone that we are on top of things and the elections will not be disrupted,” he added.

229,843 turn up for week one of voter registration

163 new Diaspora voters are enlisted so far.
News
3 months ago

The registration is going on in Teso North, Teso South, Matayos, Nambale, Butula, Samia and Bunyala.
Counties
3 months ago

Kimiti says the numbers are disappointing and more people need to come out and register
Counties
3 months ago
by ELIAS YAA Correspondent, Coast Region
Coast
25 January 2022 - 22:00