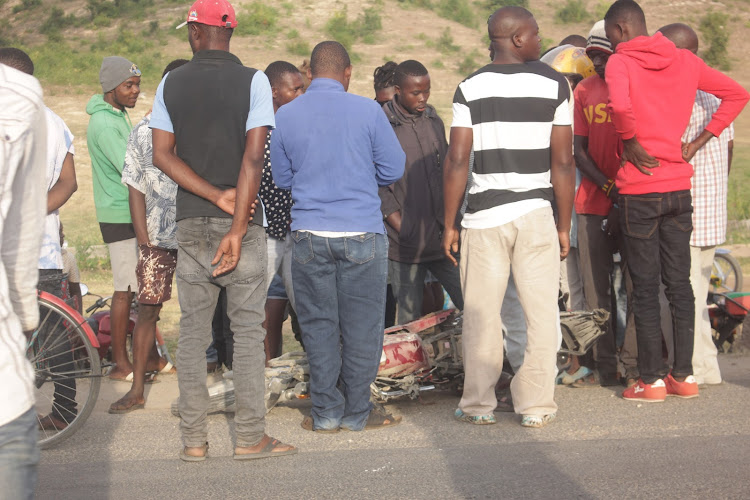 Road carnage Members of the public mill around the scene of the accident where a boda boda rider and his passengers lost their lives.
Image: ELIAS YAA

Three people were Monday morning killed on the spot when a truck hit a motorcycle at Mibuyu Saba near Kilifi town along the Mombasa-Malindi highway.

They were a boda boda rider and his two passengers,  both students at Kilimo Primary School.

The students, Dominic Gift and Tina Mkacharo, are siblings.

They were on their way to school when the accident happened.

According to witnesses, the driver of the truck, which was heading towards Malindi, knocked a Tuktuk before hitting the motorbike.

“The driver was drunk. He was trying to escape when he veered to the other lane and hit the boda boda head on. He had alcohol in the car,” Michael Kazungu, a bodaboda rider, said.

Kazungu said the driver was heading to Malindi to get sand.

He was later rescued by police officers from angry members of public who descended on him with kicks and blows.

He said the bodies were moved to the Kilifi County Hospital mortuary awaiting postmortem while the driver was admitted at the hospital.