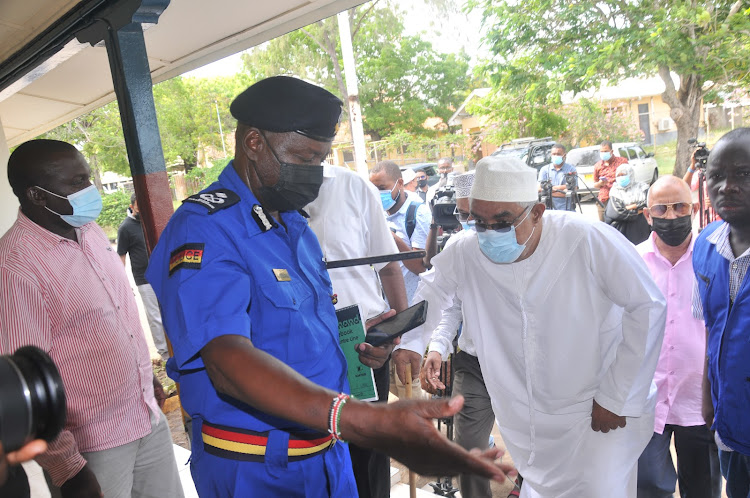 Police have launched an investigation to ascertain whether remarks made by Lamu businessman Abubakar Amana last December could have triggered the recent wave of attacks in the county.

Abubakar, a brother to politician Rishad Amana, is alleged to have made inflammatory remarks against a particular community in the region.

On Wednesday Abubakar, accompanied by his lawyer Abubakar Yusuf, Muslim for Human Rights chairperson Khelef Khalifa and his family members, surrendered to the authorities.

The Director of Public Prosecutions Noordin Hajj had written to Inspector General of Police Hillary Mutyambai to initiate investigations against the businessman.

He is accused of making hate remarks in a video clip that went viral last December.

In the letter dated January 11, the DPP stated that the alleged utterances could incite feelings of contempt, hatred, hostility, violence or discrimination and may be contrary to article 33(2) of the Constitution and Sections 13 and 62(1) of the National Cohesion and Integration Act No. 12 of 2008.

“The alleged remarks captured in the video clip on December 19, 2021, during a press briefing in Lamu, refer to certain parts of Kenya belonging to certain tribes and tribal background being a precondition for seeking an elective position in these areas,” read the letter in part.

Abubakar was received at the police headquarters by deputy regional police commander Peter Njeru, who said they were going to investigate him and take appropriate action once the investigations are done.

His brother Rishad  together with his lawyer had earlier last week visited the police headquarters to do a written undertaking, promising the officers that they would present him on Wednesday since he was in Tanzania for medical treatment.

“In a civil way, we want to say that Abubakar has voluntarily surrendered himself to us, and the relevant agencies that were seeking him are going to take up this matter and carry out investigations and appropriate action will be taken,” Njeru said.

At least 15 people have been killed including four elite GSU officers in a wave of attacks allegedly perpetrated by al Shabaab militants in parts of Lamu.

“Now that we are with him, he will be investigated for the utterances that he made with a view to see whether it has any links with what has been happening in Lamu since the beginning of this month," he added.

"Lives have been lost and there has been a lot of destruction of property with a number of residents fleeing the affected areas,” he said.

He added that Abubakar will be set free if he is able to exonerate himself but if found guilty the law will take its course.

He further cautioned residents and politicians to refrain from using inciting words.

Lawyer Yusuf denied any wrongdoing on the part of his client, saying that his words were taken out of context, adding that he is confident his client will be acquitted from any criminal charges.

“As lawyers, we have looked at the video clip, we have analysed it and we have seen nothing alarming. His words were taken out of context,” he said.

Khelef accused the police of terrorising Abubakar, who he said was just an ordinary citizen with no influence as purported.

“Abubakar is not a politician and neither is he an influential person, ordinary people say a lot of things. The police should go after politicians who make a lot of hate remarks that are even worse than what Abubakar is accused of,” he said.

He accused the state of having two sets of law, one that is always ready to pounce on the ordinary citizen and another that turns a blind eye to what politicians say or do.

Shabaab attacks, loss of IDs may cause Lamu to miss voters' target

In the current exercise, the IEBC is targeting to register 17,000 new voters in Lamu.
Counties
5 months ago

The reservists will receive a monthly stipend of Sh5,000 that will be paid in a lump sum of Sh10,000 after every two months
Counties
5 months ago

Most of them are from Juhudi, Marafa, Salama, Mashogoni, Bobo-Sunkia and surrounding villages, all in Lamu West
Counties
5 months ago
by ONYANGO OCHIENG
Coast
20 January 2022 - 22:00