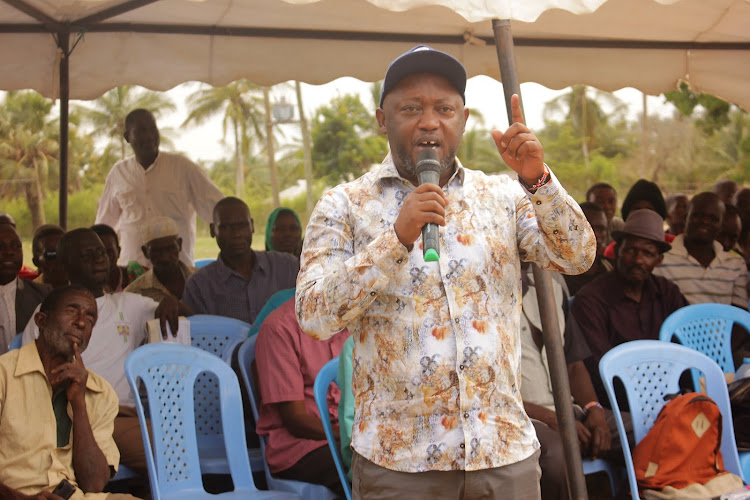 Deputy President William Ruto has suffered another blow in coastal politics after one of his MPs decamped to rejoin Raila Odinga's ODM party.

Katana was among the ODM leaders in Kilifi who left the Orange party and shifted to Ruto.

He has played host to the DP in several rallies and development projects in Kaloleni.

In December last year, Katana accompanied Ruto in public rallies in Mariakani and Kaloleni in the constituency.

Katana was also tasked with organising another rally in the neighbouring Rabai constituency.

He was one of the trusted foot soldiers for the deputy president in the region.

The first to ditch the DP’s party was Michael Kingi who joined the Pamoja African Alliance associated with his brother and Kilifi Governor Amason Kingi.

Speaking in Kaloleni for the first time after re-joining ODM, Katana said he was not committed to UDA anymore.

“I know many things have been said over my short stint in UDA. I am an ODM life member and I am back home. As a leader you need to go where the interests of your people are well taken care of," he said.

"The future of Kenya is in ODM and I am in full support of the Azimio la Umoja,” he added.

Last week, Katana accompanied Raila for a rally in Mwatate, Taita Taveta county where he was officially received back to the party.

Katana will face Edward Saro in the nominations. He is his biggest competitor so far.

In Kilifi Baya and Jumwa are the only leaders who have remain loyal to UDA.

Another leader who has ditched UDA is nominated Senator Christine Zawadi.

Zawadi declared that she is going for the Kilifi Woman Rep  seat on a PAA ticket.

Tug of war in Kilifi politics ahead of 2022 polls

Kilifi leaders are sharply divided on the political course to take.
Counties
8 months ago

Raila, Ruto in tough battle for control of Coast

ODM boss on Monday started  five-day tour of five counties; the DP expected back at Coast in two weeks.
News
1 year ago