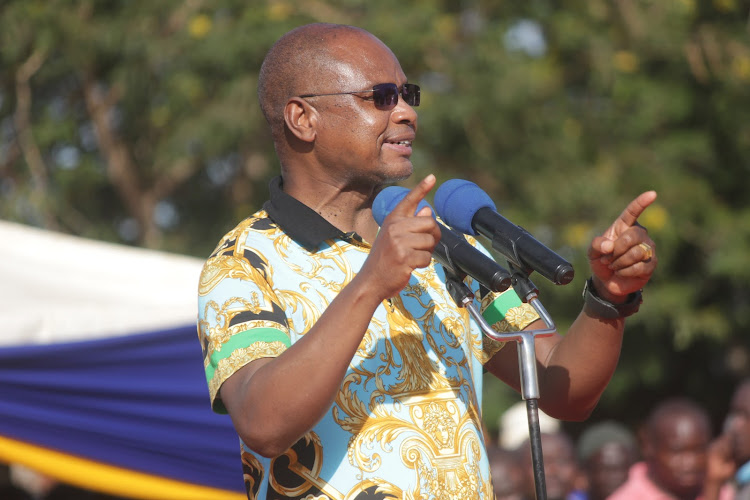 The tour culminated to a public rally at Matanomane grounds where he drummed up support for PAA.

The tour was described as an entry point to the rally, which critics say was organised as a retaliatory strategy after the party received a backlash in Ganze during the launch of the tamarking of the Bamba-Ganze-Kilifi road.

Mwambire said Kingi should serve the people until he leaves office.

“If he wants to campaign for PAA he should resign and campaign in full force. If he was in Ganze to inspect projects he should concentrate on that,” he said.

“There was no development discussed at the rally but only PAA politics. Why organise a rally using government resources then start campaigning for a political party?”

Mung’aro said it was meant to endorse leaders who will vie on the PAA ticket.

Chief Officers who attended the rally and are eyeing political seats were Ben Kai who has for the past eight years served in Kingi’s administration as the chief officer for finance.

He has since been moved to economic planning. He is vying for the Kilifi senator position.

Kenneth Kazungu is vying for the Ganze MP.

Kazungu has for the last eight years served as the chief officer for roads, transport and public works.

During the Friday’s meeting, he acted as the host chief officer.

During the meeting, city lawyer George Kithi declared his intent to vie for the Kilifi gubernatorial seat under PAA.

For the past one year, Kithi has been campaigning for the Kilifi senatorial position.

Though he had not declared the party he would seek election on, he was associated with Deputy President William Ruto’s United Democratic Alliance party as he always accompanied Ruto in his Kilifi rallies.

“The governor candidate is the lawyer who transacted all county legal matters. He signed a 15 years contract for a company to undertake revenue collection on behalf of the county yet Kingi’s tenure could last only 10 years,” he said.

“There was a sinister motive but he okayed it. This is the same person Kingi wants us to trust with our resources.”

He urged Kingi to stop blaming the ODM party for his failure.

“Kingi has been in ODM for over 15 years. He served as minister in three ministries as an ODM MP. As a governor he has received over Sh80 billion for the last nine years. This money was not sent to a party, but to a government, he is heading,” Mung’aro said.

“He was to oversee the prudence use of these funds but he chose otherwise. He has now failed and he is blaming it on ODM. All along Raila was the messiah now he is no longer messiah, what changed in between?”

He said PAA is meant to hoodwink the people for the leaders to continue with their looting spree.