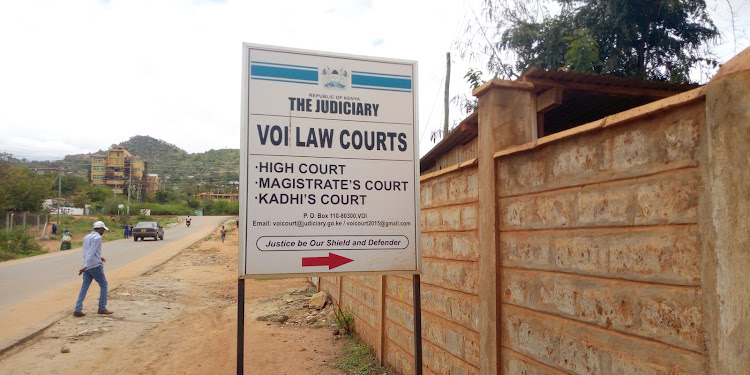 SUSPECTED POACHERS: The Voi law court gate. The four pleaded not guilty and the case is slated for mentioning on January 25.
Image: SOLOMON MUINGI

The four were also charged with being in possession of 13 sacks of sandalwood that weighed 287kgs.

They were nabbed by Kenya Wildlife Service officers on Wednesday at Manga in Voi, Taita Taveta county.

The suspects had stashed the illegal consignment in sacks of polythene bags and were being transported to the market.

The case is slated for mentioning on January 25.

Cases of poaching have been a thorny issue in Tsavo National Park with bushmeat poaching being on the rise.

Stakeholders in the county are set to establish a wildlife security hub that will help combat human-wildlife conflict, illegal trafficking and poaching through an integrated approach.

The two state of the art centers will be located at the KWS Voi office and Kasigau wildlife corridor.

The hubs will provide a coordinated and multi-agency approach to deal with poaching and perennial human-wildlife conflict in the region.

The Tsavo National Park is rich in biodiversity and contains both animals and plants of high ecological value. It is Kenya’s largest national park.

Wildlife insecurity in Kenya is characterised by poaching, illicit wildlife trade, commercial poaching for bushmeat and destruction of habitats.

The KWS data has placed Taita Taveta county as a poaching hotspot.

There have been frequent seizures of illegal bushmeat over the last six years, mostly from dik diks and eland- the world’s largest antelope.