The accident involved a BMW and Subaru legacy personal vehicles

Among the dead is a woman and her two children.

One of the vehicles caught fire following the heavy impact, burning two on board 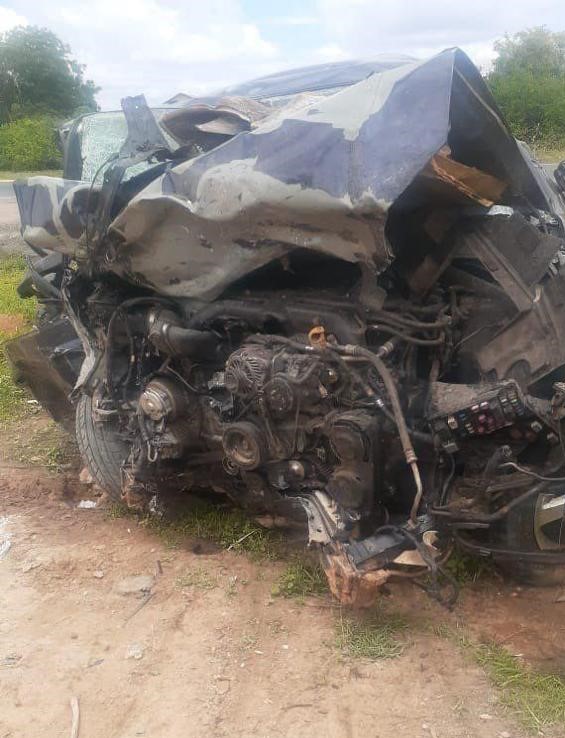 ACCIDENT; One of the vehicles that was involved in a road accident at Engwata in Mackinnon, Kwale county on Saturday, December 25, 2021.
Image: SHABAN OMAR

At least 6 people died on the spot and two others left in critical condition in a road accident at Engwata in Mackinnon, Kwale county along the Nairobi Mombasa highway.

The accident involved a BMW and Subaru legacy personal vehicles that collided head-on.

Among the dead was a woman and her two children.

The accident was reported by the nearby GSU police officers manning the highway.

It is said the BMW caught fire following the heavy impact, burning two onboard while four others were killed instantly in the Subaru vehicle.

The two were burnt beyond recognition.

According to Ombaka, the BMW was travelling from Nairobi to Mombasa while the Subaru was heading in the opposite direction.

The Subaru was carrying at least six passengers.

Ombaka said the driver of the BMW tried to overtake some vehicles and ended up colliding with the Subaru which was also at high speed.

“It looks like the driver miscalculated the overtaking distance and unfortunately hit the other oncoming vehicle in the opposite lane,” he said.

The injured were taken to Voi Referral hospital in Taita-Taveta.

The bodies were moved to Voi Mortuary.

The remains of the vehicles were moved to Mackinnon police station.

Meanwhile, Ombaka urged motorists to be very careful on the road and warned against speeding.

He also advised long-distance drivers to stop over for some rest before proceeding with their journey.

“Most drivers suffer from fatigue due to long driving and can’t make rational decisions while on the highways whose results are very catastrophic,” he said.

Mombasa-Nairobi highway especially within Kwale has claimed a lot of lives in road accidents.

In May five perished and four other sustained serious injuries in a grisly road accident at Mwembweni in Samburu within Kinango.

The accident involved a lorry and a Nissan Serena vehicle.