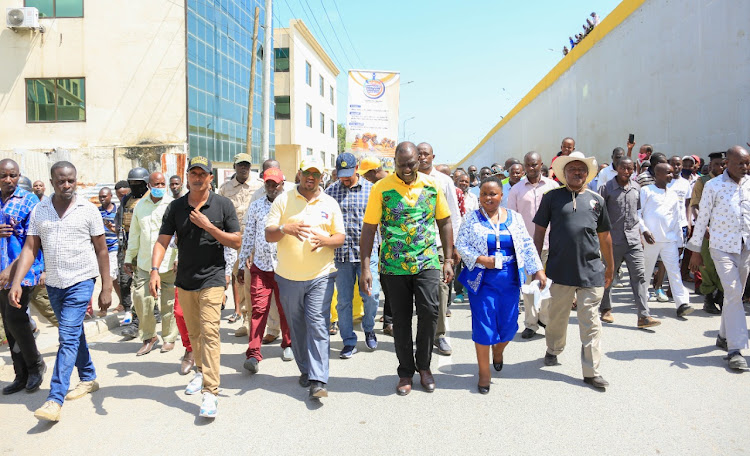 A section of MPs from Coast region want the Ndung’u Land Report made public.

They further said the implementation of the report’s recommendations will sort out the sticky land issues in Kenya for good.

The MPs noted that if the Government was committed to revisiting the country’s historical injustices, then the land issue in the area must be prioritised.

The leaders, who are allied to Deputy President William Ruto, said the move will be a new start for “our people who are living in poverty because their land was taken away by those in power”.

They were speaking today at Burhani Grounds in Mvita constituency where Ruto engaged with the Mombasa county community leaders.

“They have been exploiting the poor and stealing their land. This must stop,” she said.

She said Raila had frustrated every effort that will transform the lives of the people of the Coastal region.

“He pretends that he is not in government. Yet, he prides himself of being the President’s adviser. We will not vote for Odinga.”

She challenged Raila to spearhead justice for the people of the Coastal region “if he wants our support”.

Mwashetani said the tricks used by Raila to win the region’s political support during electioneering periods are over.

“We must sort out historical injustices in our country forever. That is why we have an economic charter with Ruto that will address this problem,” he explained.

On his part, Ali said Coast Region will keep fighting for it resources. He said they will unite as leaders and further its liberation.

“We have a rich history but the most prominent one is the land problem. If Raila is serious about leading Kenya, let him to tell us who stole our land.”

Omar downplayed the notion that Raila is a liberation hero.

“He is not but a political con. He just attempted to mutilate our Constitution through BBI,” he said.

The former Mombasa Senator said UDA will ensure the “return of people’s resources to its legal owners”.

Urging the people of Coast Region to shun leaders who exploit their problems only during the electioneering problem, Kikuyu MP Kimani Ichung’wah said Raila is a project of the rich people who exploit the poor.

Ruto asked leaders to work towards serving the interests of the people. He urged Kenyans to rally behind an issues-based political formation that will unite the country and kill tribalism.

The two presidential candidates campaigned at separate events in the county.
Counties
7 months ago
by STAR REPORTER The Star
Coast
19 December 2021 - 17:11