•During the Covid-19 period, some lawyers closed down their business and court operations slowed but the number of advocates conning clients went high.

•Before Covid-19 the commission used to receive 100 cases. 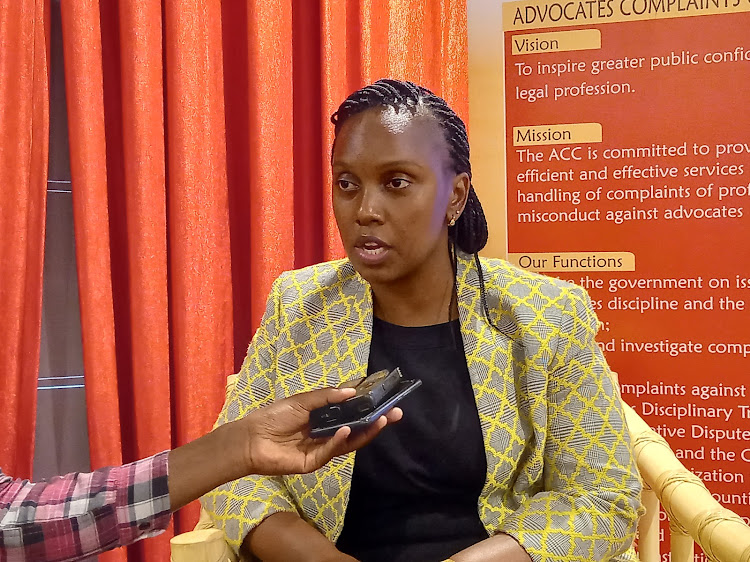 Over 70 complaints against advocates are reported every month by clients to the Advocates Complaints Commission.

Commissioner Caroline Saroni said 80 per cent of the cases involve advocates who refuse to give back clients’ money paid by insurance companies after winning cases.

Saroni said during the Covid-19 period, some lawyers closed down their business and court operations slowed but the number of advocates conning clients went high.

Before Covid-19 the commission used to receive 100 cases.

The cases involved relatives of those who lost lives through road accidents and clients that survived but battled for justice in courts.

Nairobi and Meru are leading while at the Coast region, Mombasa leads.

Some of the lawsuits reported were advocates failing to attend court sessions, keeping clients informed, delays in taking active steps to prosecute and finalize clients’ matters among others.

Saroni spoke on Tuesday at Diani, Msambweni, during a sensitisation campaign on effective and efficient ways of filing complaints on matters of professional misconduct against advocates.

She said since the commission started many advocates have been summoned and disciplined by the Disciplinary Tribunal and clients accorded justice.

The commission was established in 1989 and started operating in November 1990. It is government-funded.

It is a statutory body formed under section 53 of the Advocates Act to inquire into any complaints against practising advocates, firms of advocates or any member and employee.

The commissioner said some of the advocates were admonished, others temporarily and permanently barred from practising law.

Saroni said citizens should consider legal processes of acquiring advocates to avoid being denied justice by falling into the hands of fake lawyers.

“Before getting an advocate, seek confirmation with the Law Society of Kenya through their website,” she said.

Saroni said each advocate must present a validated practising licence.

The commissioner urged clients to agree on payment methods and the nature of work on papers with potential clients for record-keeping and easy follow up in case things go south.

Advocates complaints commission state council Lydia Ochako said apart from the punishment they tend to find alternative dispute resolutions between the accused and the defender or take the matter to court handled by the advocate disciplinary committee for the aggravated cases.

Ochako warned advocates against failing to honour their professional undertakings.

“Let’s be honest in doing our work and practice integrity because misappropriating citizens’ funds is denying them justice and punishable by law,” she said.