Cotton, cane and coconut farming to be scaled up in Galana Kulalu

• Kariuki said 5,100 acres at the Galana Kulalu Food Security Project have been covered and phase two of the remaining 4,900 acres is 72 percent complete.

Agronomists at Galana Kulalu have been testing the agronomic conditions of 30 crops, besides maize, to find out which one does well in the area. https://bit.ly/3mAA53G 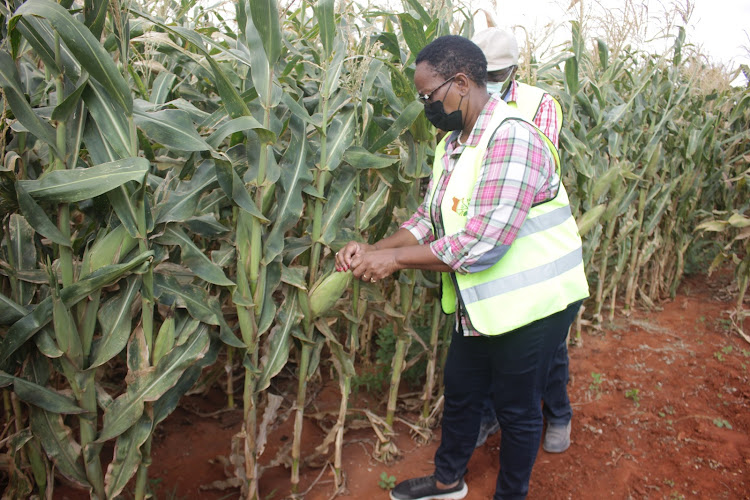 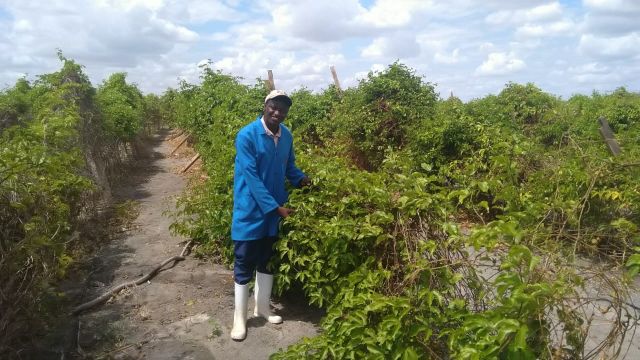 Allan Mbugua, an agronomist at the National Irrigation Authority based in Galana Kulalu Food Security Project, in a demonstration farm where passion fruits are being grown.
Image: AGATHA NGOTHO

Agronomists at Galana Kulalu have been testing the agronomic conditions of 30 crops, besides maize, to find out which one does well in the area.

Water and Irrigation CS Sicily Kariuki said there is a demonstration farm which has been in operation for two years for agronomic conditions trial of the crops.

“Already, there is some isolation of products which are doing well in this location. This will give confidence to whoever will take over or depending on the investors' commercial interest, that the products they choose for commercialisation have been tested and tried,” she said.

The CS spoke during an inspection tour of the 10,000 model farm of the Galana Kulalu Food Security Project in Kilifi and Tana River counties.

She said some of the crops that have shown potential are cotton, sugar cane, coconut, cassava, citrus and passion fruits, among others.

Kariuki said GM cotton continued to record high yields and it is a potential crop for whoever will be interested in commercialising it.

“It is our intention that we will keep a portion of the demonstration farm for purposes of doing further agronomical assessment for other variety of crops in this region. This will help us to inform any other farmer/ investor who will be interested in setting up commercial farming in this area as we move forward,” she said.

The CS said the best performing crop today is maize, which is producing 28 bags per acre.

“This is 10 bags per acre above the average of 18 to 20 which you will find in other places. The other advantage of this farm, given the location and the high temperatures, is that we are able to do two crops of maize per season/year,” Kariuki said.

Allan Mbugua, an agronomist at the National Irrigation Authority based in Galana Kulalu Food Security Project, said the bulk of the crop being grown is maize.

He said they have planted 3,300 acres and harvesting is ongoing. He said this year, they have harvested 1,100 acres of maize.

He said they have a demonstration site where different crops that were earlier recommended for the area are being tested.

“We have coconut, passion fruits, sugar cane, cotton, mangoes, avocados, pineapples, citrus and vegetables. From that we have been able to see the crops doing well like cotton, sugar cane and coconut and now they are being scaled up,” he said.

Mbugua said the trial crops in the demonstration farm are under one acre each, but will be scaled to larger areas.

“We have started increasing the acreage under the selected crops. For example, we are doing around 40 acres of coconut and 160 acres of cotton in the next season,” the agronomist said.

With Kenya having approved commercialisation of GM cotton, Mbugua said they have done trials of both the hybrids and GM cotton.

“We are happy to announce that the GM cotton was successful in terms of cutting costs, especially on reduction of application of pesticides. It is high yielding and lowers the cost of production,” he said.

“It is the intention of my ministry that in the next three months, working through the National Irrigation Authority, that the whole 10,000-acre project will be completed,” she said.

Kariuki said the government has decided that once they have finalised investing in basic infrastructure, the 10,000 model farm will be commercialised competitively. She said this was due to the efficiency of the private sector in agriculture production.

“The National Treasury is working with the Ministry of Water to get the project to the market and identify the private sector actor (s) who will then come in and carry on with the commercialisation of the model farm. At that point I believe it will not be a model farm but a commercial entity,” the CS said.

Kariuki said there is no restrictive regime and the process of commercialisation of Galana farm is open to local and international investors.

“The best bid that we get in terms of what the National Treasury has set out is the one that is going to come in and continue from where we will stop,” she said.

She said an investor briefing has been done, and the project is packaged and already out in the market under the National Treasury management.

Irrigation CS says the government will commercialise the farm through privatisation.
Counties
1 year ago

At least 2.1 million Kenyans are at risk of starvation. Many have turned to wild fruits to stay alive.
News
1 year ago
Post a comment
WATCH: The latest videos from the Star
by AGATHA NGOTHO Science Writer
Coast
31 October 2021 - 22:00
Read The E-Paper