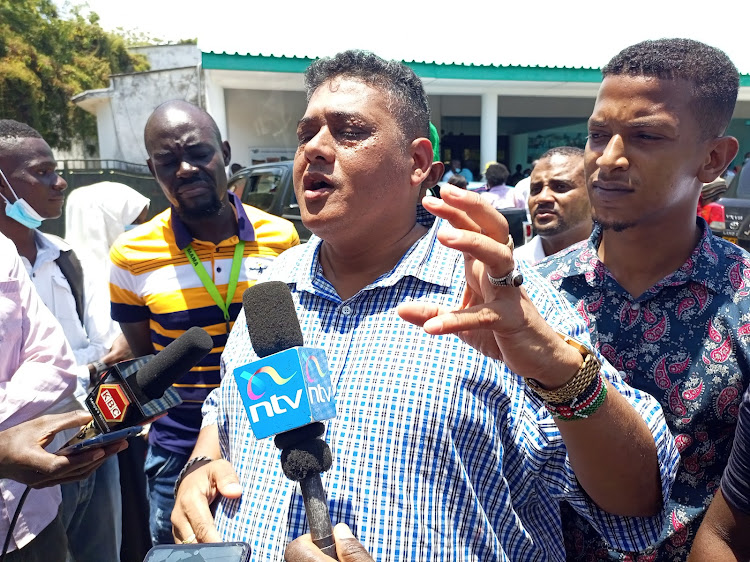 Deputy President William Ruto on Monday assured aspirants for various seats that UDA will not favour anyone in party primaries no matter their stature.

Speaking to aspirants drawn from different parts of the Coast region, Ruto sought to intervene in the wrangles that have rocked the UDA boat in Mombasa.

“The nominations in UDA must and will be free, fair and democratic. There is nobody who will be given a free ride. There is no direct nomination going to anybody unless we have only one candidate,” Ruto said at Wild Waters Complex in Mombasa.

This served to ease the tension between two factions that had emerged in Mombasa’s UDA camp.

Two factions, one led by Former Mombasa Senator Hassan Omar and the other led by Mohamed ‘Tenge’ Salim, had been running parallel party programmes, threatening to negate the gains that the party has made.

However, Tenge on Monday appeared to have toned down his criticism of Omar after the meeting with Ruto.

“We have sat down under our leader and put aside our differences for the benefit of the party,” he said.

He spoke to the media after the meeting at Wild Waters Complex.

UDA Mvita coordinator and Mombasa Woman Rep aspirant Afiya Rama said the party will now show its strength after DP Ruto resolved all the differences that had been there.

Rama, who was in Omar’s camp, said the party now has a bigger chance of toppling ODM in Mombasa.

“The party no longer has wrangles. What was there before was only sideshows. The party now recognises those who work with the party,” Rama said.

The DP said violence must never be part of UDA’s equation.

He warned that any candidate that uses violence in UDA will be disqualified.

“Violence will never be part of the modus operandi of this party. We want reason, not force. We want ideas, not hooliganism, to be the basis upon which each one of you will seek the candidature of UDA,” Ruto said.

He said unlike some parties known for stone-throwing and others that look for members who will follow them without questioning, UDA wants to be asked questions.

“Once we answer the questions, we will agree on how to move together,” the DP said.

He said women and young people will be the catalyst for the revolution that will take Kenya into the future.

Ruto will on Tuesday wrap up his tour of the Coast region by taking his 2022 bottom-up economic model crusade to Lamu county.

The DP is expected to traverse the county with meetings at Mpeketoni, Kizingitini and Mkungini where he will preside over women, youth and small-scale traders empowerment programmes.

Ruto who will be hosted by Lamu East MP Athman Sharif and Senator Anuar Loitiptip.

The DP who has launched a spirited campaign to make inroads in the perceived ODM stronghold started his five-day tour in Taita Taveta county on Thursday.

According to sources who attended the meeting, Ruto publicly questioned Tenge what his differences with Omar was about.

“Which position are you vying for? ‘None’. Aren’t we working together? ‘We are’. Then what is the problem? I thought you are running for the governor position,” Ruto told Tenge, according to the source.

Ruto said the party is bigger than the individuals.

Tenge joined Ruto in Kwale and Mombasa counties and was given a chance to speak on all occasions.

Giving the aspirants his assurance, Ruto reiterated that unity in the party will go a long way in increasing their chances of success.

He said UDA has already done about five nominations including the latest that was done in Mahoo ward in Taita Taveta county.

“We will continue to ensure that nominations in this party are free and fair,” Ruto told the aspirants.

He told them to register their supporters in UDA so as to build a mass movement.

He however asked the aspirants to make sure their supporters are people who can help the party grow.

He said to understand the bottom-up economic model so as to be able to relay the message to laymen at the grassroots, one must be sober and have some acceptable degree of intelligence.

“We have no use for cows or goats. We want intelligent, reasonable, practical supporters who will help us shape the destiny of the nation by contributing their ideas and knowledge in us, fashioning a party that is people-centred,” Ruto said.

Unemployment, ease of doing business and supporting farmers are the biggest challenges, in that order, that UDA faces.

“It is the responsibility of every member of UDA, especially those of you who are leaders and those who will be vying, to understand what UDA stands for,” Ruto.

He said UDA aspirants should rollout their candidature on the basis of the bottom-up economic model.

Ruto said the party wants a win-win arrangement where competitors could easily be supporters once one wins the nomination.

“Don’t make the competition too aggressive against yourselves. Because then you lose the opportunity to convert your competitor to be your supporter,” he said.