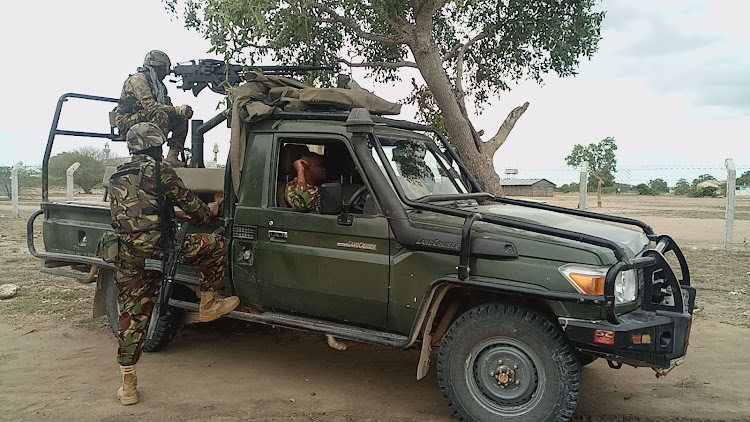 A Kenya Defence Forces (KDF) soldier was Tuesday seriously injured and five others sustained slight injuries when a vehicle they were traveling in was hit by an Improvised Explosive Devise in Boni, Lamu County.

KDF said the group was operating under Operation Amani Boni while on routine patrol between Milimani and Baure in Lamu County when they encountered an IED attack orchestrated by suspected al-Shabaab terrorists.

The injured personnel were airlifted to Nairobi.

Spokesperson Col Esther Wanjiku said KDF will continue to work with other agencies in maintaining operations in the Boni enclave.

She did not provide more details on the attack, which happened at about 9 am.

This happens after a long lull in the area from similar incidents.

The lull was out of ongoing operations in the area that involves multi-agencies.

In May this year, a similar incident led to the loss of at least four soldiers.

The area is near the Kenya-Somalia border, which has been under attack by terrorists in the past months.

Boni Forest is an operation zone as the national government has since 2015 conducted a multi-agency security exercise dubbed Linda Boni, which is aimed at chasing out al Shabaab militants hiding there.

Despite sustained operations, the militants have been striking after planting explosives on the roads used by the agencies and other vehicles there.

For instance, in April this year, two people were killed when a lorry they were travelling in ran over a similar IED.

The two were part of a team constructing the border wall that is aimed at stopping the militants from crossing into and out of Kenya.

On March 23, one person died when a water bowser headed to Usalama Camp, where the Kenya-Somalia border wall is being constructed, hit an IED suspected to have been planted by the militants.

The vehicle, which had a driver and a conductor, was ferrying water for the construction of the border security wall when the incident occurred at around 7.30 am.

In January 2016, five Police officers were killed while three were injured when a Rapid Deployment Unit (RDU) lorry hit an IED suspected along Hindi-Kiunga road in Lamu.

The officers were heading to Usalama Camp when the incident happened just a few kilometres from Milimani, which is inside the dense Boni forest.

About 18 militants and two KDF officers were killed and an assortment of weapons, including a video camera, was found.